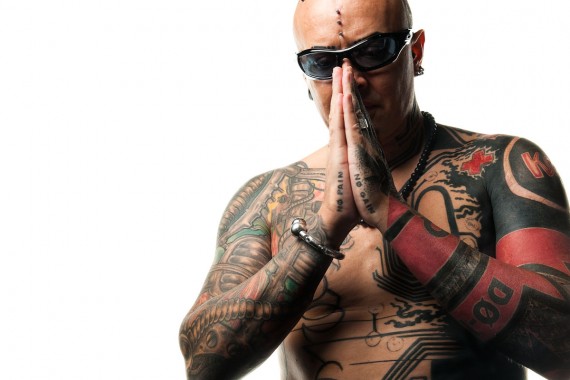 So here’s a story about working up the courage to go for what you want to shoot – and being rewarded in the process. Got a lot of cool lessons learned here.. I figured i’d share:

The First Day: A Shoot with a Friend
Im in the Exhibition hall of Photoshop World last year, walking around after already giving a talk at the Bogen booth. I talked about shooting, accessories and the such. It’s the last day of the conference and i’m just taking it all in. walking around the trade show floor.

I notice that there are several people turning their heads and talking about a a man thats walking around. He’s bald, pretty built. Tattoos cover him and he’s wearing a white shirt. His face has these studs coming out of it- body modifications. This guy just looked -amazing-. Naturally- we’re all photographers so i’m sure the only thing going through the mind of everyone is “Man.. I wish I could just be taking a shot of him.”

LESSON ONE: No matter how weird your stomach feels about the concept – try to get over it as best as you can, as quickly as you can and ASK SOMEONE. Tell them who you are. Let them know you are a Photographer. Try to give them an idea of what you -see-, and that you’d like to capture that in a picture. The WORST they can say is “No thank you” and you lose nothing.

I think to myself.. “He’s walking with a very pretty girl and looks like a cool guy. Let me figure out a way to talk him into posing for a picture.” I work up the nerve after a while, walking up to him. I tell him that he has an awesome look and that I would love to make a Photograph of him. He agrees, and I ask him to follow me back to the Bogen Booth.

I’m setting the lights up, and there’s three people behind me wanting to watch the scene. That should be pretty easy. I’ve talked to 300 people before.. totally not a problem…

As I am setting the lights up, a voice comes up from behind, catching me off guard

“Hey.. i see you are taking a picture. Want me to be your assistant?”
Who is it? None other than world famous photographer, Joe Mcnally

Now, despite Joe being my friend.. it took everything in my power to not just jump up and down and squeal like a little girl. Joe is phenomenal behind a camera, and for a very long while i’ve admired what he can do and how he does it. I put him on the top of a very short list of inspiration. To have him wanting to assist me is something that made very happy indeed.

Now, lets compound this by having another great photog, Syl Arena, TAPING the whole thing on his Canon 5DMKII camera… making me even more nervous.

Now, the 3 people behind me have grown to a swell of about 45 people.

This totally gave me a new appreciation for people who present photography. I do a lot of talking behind a computer screen working websites, or cranking on Lightroom. I have the luxury to shoot and work inside of a studio where I can immediately delete my mistakes. To have them on display on a huge monitor in front of a large group of people takes an incredible amount of intestinal fortitude.

Lesson 2: Know your gear. The best way for you to instill confidence in yourself and in the person you are trying to take your picture is to not get flustered with the gear thats in front of you. Knowing where to put the light and get it -near- will take you a long way on ‘on the spot’ shooting.

Joe asks the guy “Would you mind taking off your shirt?” The guy, very softspoken.. says “I do not know you too well yet” and smiles.

I get it.. “He’s trying to draw a line” I think to myself. “That’s cool… he doesnt know me.. i dont know him.. but I can make a nice pic of him.. lemme at least try that” So, I setup a couple of shots, showing him all along the way.. and he likes them. He’s very gracious.. strikes a couple of humbling poses.. all while the crowd watches. Lesson 3: The person on the other end of the camera, no matter who it is, is on the receiving end of what you want to do. To some, you may as well be pointing a gun. They need to feel like you are partnering with them to make the best image you can. Once you can show the person you are on ‘their’ side, you can start working on better results.

Joe asks me “What do you think” and I reply.. “I think it’s great.. is there something you think you would do differently. ” We go to change to a black background, and I explain it to the audience of about 50 people there now, and the Manufacturer rep. Looking at the crowd, I say with the biggest smile on my face “No, it is not completely lost on me that Joe McNally is my assistant” Still feeling like i’m trembling over the ordeal. He’s a friend.. But when we work, he’ll always get my respect.

So.. he proceeds to talk to the crowd about the importance of the photographic assistant and stuff.

Lesson 4: You can always learn something from anyone. Sometimes there is a misconception that an assitant is just a reflector holder or a light rigger. That may be true at times, but I argue that this person is also a good collaborator for your image. They will be your eyes and ears when you are not looking.. and get you out of a rut when you are banging your head against the wall. In fact, you’ll find very accomplished photographers completely willing to be an assistant to another photographer for the experience of seeing something from another vantage point. Its something you should do often.

I continue to do my thing.. and the photo shoot finishes.

I graciously thank the model.. his name is Lukas, and I have the audience thank him for his participation.

People offer to take pictures of me standing next to one of my favorite people and friend.

I look like the Cat that swallowed the canary!!!!

And so ends a very good day…and a couple of great lessons along the way.