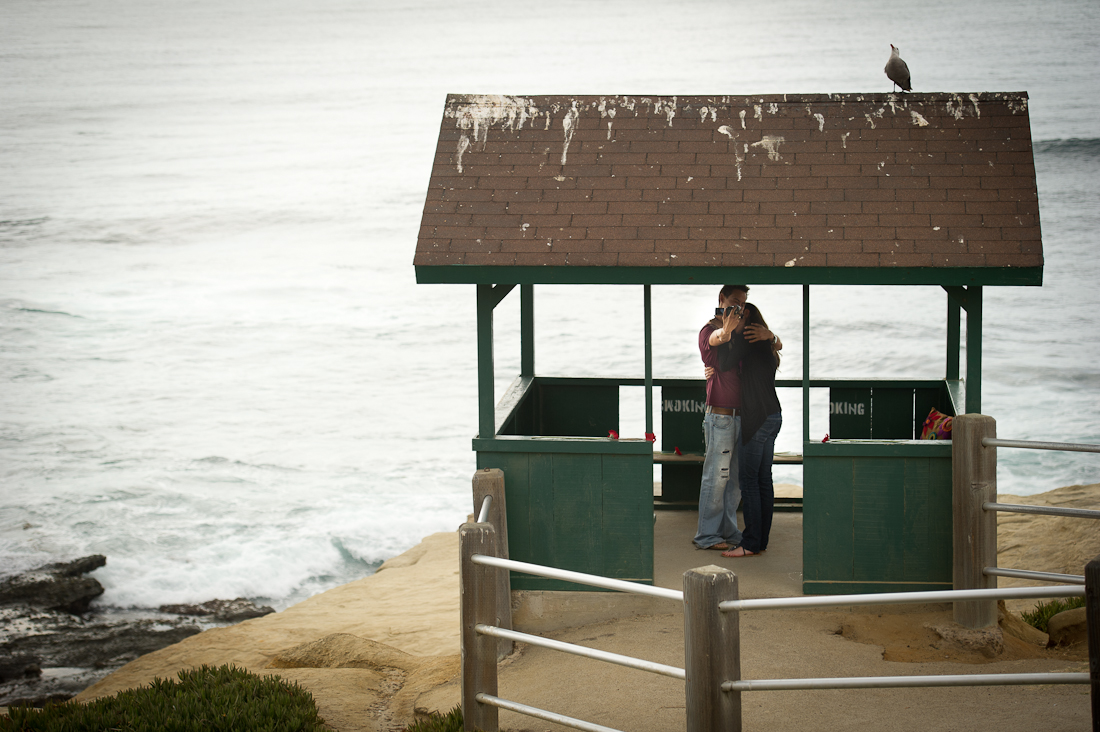 So there I was walking around with Ed Sanchez (one of the co-founders of NIk Software) getting some fresh air out in the beautiful La Jolla, CA area. We were in the office checking out stuff but the day called us out to just go walk and take the sea air in.

We all grabbed cameras, just in case, but I think we were mostly into just being outside for the afternoon. As we were walking, I notice a girl running down this ramp to a young man waiting, taping her with his video camera the whole time. He’s in this little Gazebo and, despite the wind, its adorned in red ribbons notecards and little tea lights. She gets to him and hugs him as if she hasn’t seen him in a million years, and he turns the camera to himself.

I think to myself “This guy isn’t done yet.” As I’m doing that, I see Ed talking to another girl in spanish whos standing by the rails. She tells Ed that he is going to propose.

It makes me go back to several years ago in my head. I surprised my wife Jenn during our engagement (that’s another story for another day), and someone had the foresight to make sure it was taped.

I’m a big storyteller.. and I love talking about all of the cool moments that happen to us. I’m also grateful to have the NIkon D3S with me that also happens to do movies in addition to pictures.

No tripod, no preparation… in a couple of clicks I switch over to Movie mode and we wait and watch:

(The song is called “Please Don’t Go” by Barcelona – an amazing Seattle group. Their album is a must get!)

It’s not the best video that i’ve shot. Its shaky in some spots.. soft in others.. but that doesn’t matter. What’s most important here is the look on her face. The intensity in how they hold one another. This was their moment.

I gave them some time alone and just waited a while till they seemed to be back to normal. I walked over and congratulated them. I then gave them my card and told then it would be my pleasure to send them any video I got and some pictures if they wanted. They immediately said yes, and let me do a couple more frames of them by the sea.

You can just feel how happy they are. Thankfully – they’ll be able to as well for the rest of their days.

I don’t even know their names.. but congratulations. It’s an incredible ride…