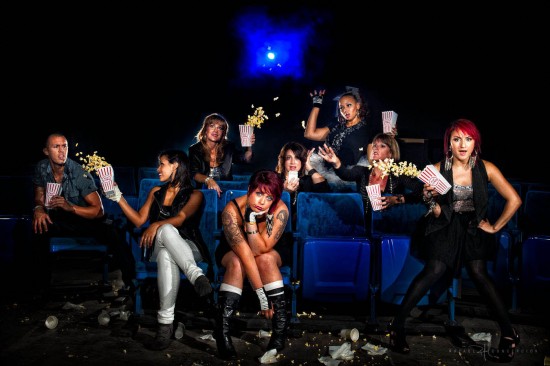 My friend Kathy asked me not too long ago if I could help her take a picture of a concept she had for her friends dance school. For the end of the year, they wanted to have a picture made of all of the instructors in a movie theater scenario, kinda bickering with one another while she sat in the middle. Fake a movie theater? Throw popcorn? I’m down!

This was actually done in a warehouse called Arts on Ninth in Ybor (sadly, the place closed down). We setup about 4 speedlights and a gelled overhead projector in the back with some fog. A couple of pops of the fog and we got the Theater light we needed. From there, it was just a matter of getting them to play with one another enough to make a good frame. It pretty much went; toss popcorn, try for shot, clean up popcorn.. put back in cups, repeat. (I wouldnt eat that popcorn).. After a couple of shots, we hit the frame we wanted, Bob’s your uncle!