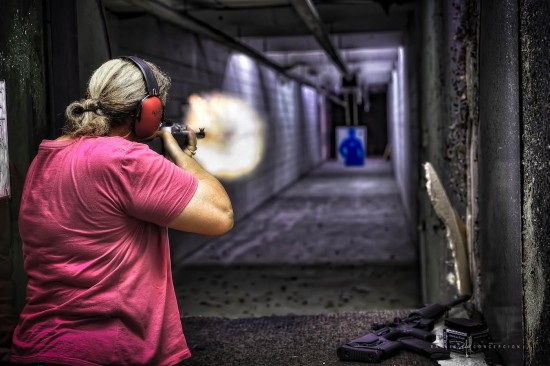 Like em or hate em, guns are something that are out there. I’ve never had an opinion on them one way or another – but at the same time, I had never really given any thought to the concept of going to a place to fire off a bunch of lead at a target. Not because I thought anything bad of it..

Truthfully.. i’ve always been scared of guns. Guns in the wrong hands have killed friends and loved ones… they just make me very very nervous.

So recently, I was invited by my friends Jay and Susan to go out and just get a better understanding of them. Saturday morning we set out – with their arsenal in tow, and I spent the day working through different types of guns and shooting them at Shooting Sports Tampa.

One of the things that I couldnt wrap my head around was just how loud a gun actually is. That in itself was very unnerving. The other thing that really left a mark with me was the cross-section of people that were at the range. Mothers and fathers, sons and daughters. Businessmen and free-wheelers.. It seemed like everyone was taking fun, in a quite responsible manner. There were all of these rules – that everyone was quick to point out was for safety and general welfare of those around them.

While Susan was shooting a Mini 14 rifle – I thought it a good idea to try to see if I can capture the muzzle fire of the gun. They pointed out that they thought it would be very hard to capture it. I thought that not only could I capture it.. I may even try to do an HDR of it. Camera and Tripod in tow, I setup for the shot and played around with it in post. That’s what you see above.

That night, while I laid in bed I wasn’t left with a Testosterone filled high of being able to overcome a fear. I laid there with a sense of humility. I thought about those soldiers of ours – kids really – that are out there firing these loud dangerous machines in the face of danger for our safety. I thought about the power this thing had to protect – and harm human life. I was left with a tremendous amount of respect and caution – something I dont think I was really ready for. Whether I do it again or not – it was an incredible lesson in respect. For that, I was truly grateful.