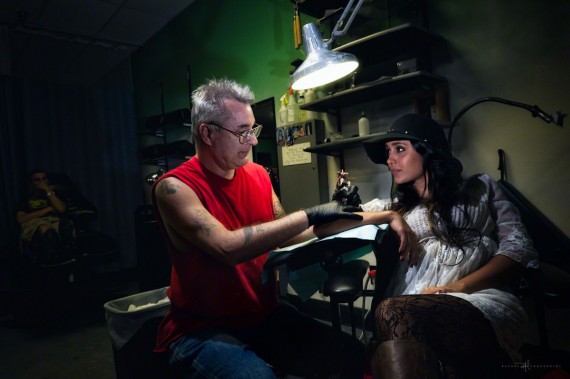 Been sitting at home most evenings catching up on some Photoshop work, as well as doing some Google Hangouts (Make sure you check me out on Google+). For some reason, I felt like I just couldn’t put anything together yesterday morning – just felt off. Very tired. However, this Wednesday was Ybor Shootout night.

I run a group in Tampa called the Tampa Bay Strobist and Photoshop Collective. I actually just hang and help out – my good buddy Kathy is the soul and energy of this group. An idea she and I started for just a few people to hang out at a Dennys and talk shop has blown into about 500 photographers and models in the area that get together for shooting. Every month, models and photographers get together at New York New York Pizza in Ybor city. Tonight – about 65 photographers would come and get paired with models – hit the streets and try to make an image.

However, tonight, I wasn’t really there – energy wise.  Walking around Ybor with my group.. I was just going through the motions.  However, I saw that some photographers decided to run into Pauls Tattoos in Ybor City . Paul (the owner), saw them outside and offered for them to try some shoots in his place (with AC).  That’s one of the great things about Ybor – the community is very pro-art.. which rocks.

Let’s Give Meagan a Tattoo!

Meagan, pictured here, isn’t really a model – shes a photographer.  But people wanted to shoot her, so she decided to pull double duty on the shoot.  As everyone was making shoots with her in the studio, I thought it be neat to get something where it looked like she was getting some work from Paul.  Rather than light the whole place, I figured i’d spot light the two of them, and really drop the ambient in the place.  I wanted to give it this foggy “One Night in Bangkok” feeling… (even though the song’s about chess.. you kinda get what i’m talking about)

Nikon D3S – SB900 high camera left aimed at Paul.  For Meagan, I took a Yongnuo 468 and had it set to about 1/128 power aimed at her (You can get those flashes on ebay for cheap.. like 100 bucks, cheap.  Light it light at some point)  I took a Rogue Flashbender and flipped it so the black logo side was facing the Flash.  Set like that, I was using it as a Flag, trying to prevent some spill onto the side and background.  Shot is then brought into Photoshop CS5 and some post work is done.  This should benefits from some effects from Nik Software’s new Color Efex Pro 4 – giving it the mood I was really looking for.