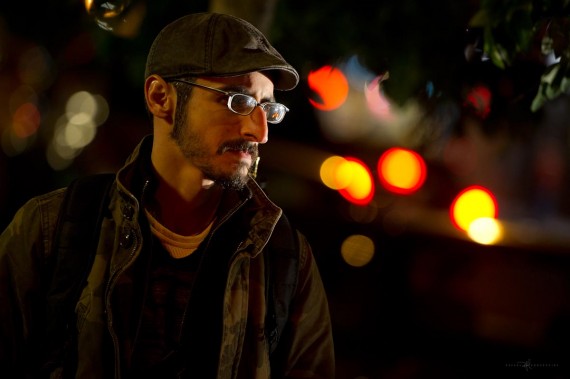 We were walking around 46st during the Photo walk at PPE, looking for places to shoot in the dark.  Had my camera with a 70-200 on.  As I was walking and chatting, I saw John kinda hanging out in front of a Bus garage.  At the same time, I saw a bus coming out and wondered “If the bus turns on its lights as it hits the driveway, they should hit him and I can make a shot”

As the lights were coming on, I switched the camera to 1600ISO and racked out to 200mm.  I yelled at John to just look a little to the left, and made a few frames.  Had him tilt a little bit more, and fired this one.  Just as it was done, the bus turned right and the light was gone.

I thought I didnt get a good frame and mused “Man.. it be cool if the bus could just go back up into the garage” When all of a sudden, we heard it’s backup lights go on!

Only for a second.  The bus drove off, and so did the opportunity to try.  Fast thinking on the gear, and keeping an open eye.  Sometimes you just dont know where the light’s gonna come from. 🙂