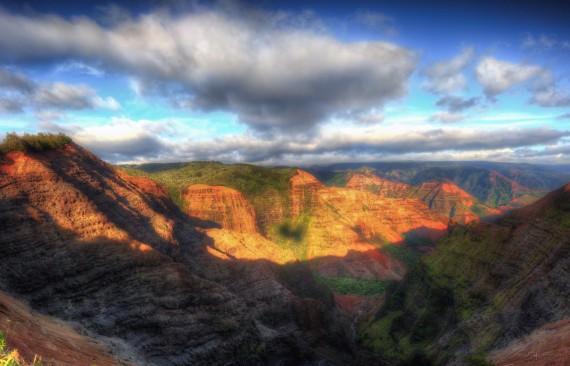 When I was out last with Moose Peterson teaching at a workshop in Kauai HI, I did a lot of shooting specifically for HDR. While I was very happy with what I was getting, in terms of HDR, I did want to make sure that I got some shots SOOC for myself. I can’t even begin to tell you how challenging the light conditions were to be able to achieve that.

Take for example Waimea Canyon. Moose took us up there to chec the place out one day. While there were cool images that I did that were non HDR, I think that the image overall suffered from a lack of magnitude . When you stand up there at the Canyon, its immense . Not only is it big, but it’s wide, and it goes out pretty far. To me, this meant that there was a lot of foreground that would come into play on the picture.

With the way the sun was setting on the sky, this meant that about a third of the picture would be rendered in shadow if you tried to go with your gut and meter the middle. Try as I wanted to not to shoot HDR, this was one of those that I said “I’d rather come back with it than not”

The shot series was 36 exposures. 9 shot brackets because of the bright day. When I take panos, I like rotating my camera to portrait mode by tipping it on its side (Vertical) . Doing the panos in this fashion give you a lot more picture when you merge, which makes it a little bit better instead of merging a series of images taken horizontally and cropping too much into out.

Cool part about this is you get a really big shot, and you get a great range. From there, its about processing and you’re good to go!