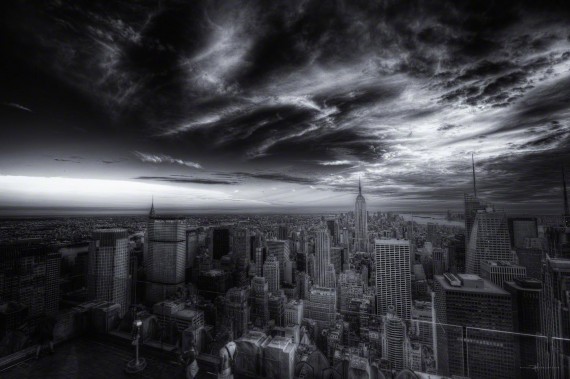 This was one of those shots that I wanted to play with in black and white (ish) because of the swoop of the clouds in the area. This is shot from the Top Of The Rock with my Manfrotto Magic Arm and Tripod attachment (I talked about it on DTown TV episode 94. Go here if you want to see which parts: http://bit.ly/sQyAp6 its at around 5:30 mark or my blog post about using it here: http://bit.ly/tOh3Rj )

I made a bunch of centered shots of the series, but because of how the clouds were one sided, I just didn’t dig how the scene looked with only half action on the right of the shot.

By tilting the angle of the shot, I use the sunset light and clouds to “circle in” to what I wanted to highlight. It also kinda makes you look downtown, into the picture. It made me think of that part in Ghostbusters when the clouds circled their building.. even if it wasn’t the Empire State.