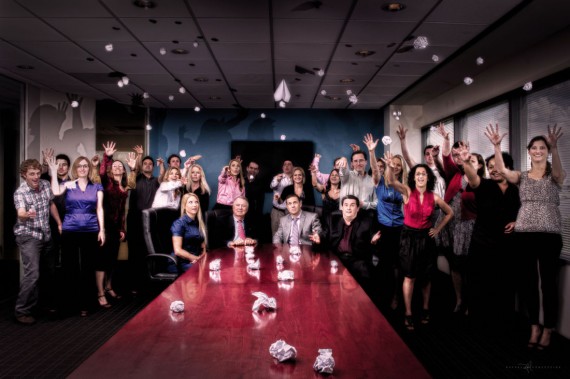 Several weeks ago, I got a call from a friend of mine who wanted me to help on a corporate office shoot. With a days notice, I took off and was out with +pete collins setting up to shoot the folks over at +Socius Marketing . Such a great group of people that are based in#Tampa – its one of the fastest growing companies here in Tampa bay.
In the middle of the corporate group shot, I thought to myself “If I were a writer in a company full of other writers.. I could think of nothing cooler than to get into a paper fight!” I saw this picture of all of these guys whipping balls and paper airplanes at one another while the heads of the company just looked around with a “Jeesh.. what did we get ourselves into” kinda vibe. Now.. that’s what I woud’ve wanted, but thats not what I was there to do.

As we were setting up the shoot, i offered my suggestion for a fun pic. I figured we could get a pack of paper make some balls.. and give it three or four throws. . thats it. All lights were set, and off we went with the shoot.

I proceeded to finish the shoot, process it.. and send it back to Socius. That night of the shoot, I had run home and worked on this file.. but then didn’t do anything with it. In the end, this was my take on the event.. not what I was hired for..

As it turns out, I got a call from Stacy at Socius, asking for a specific file. In the middle of the email convo, I said “You know what? I dont think I showed her this file.. lemme send it.. ” As it turns out, it was one of her favorites, her immediately shooting it around the office. She even talked about using it as part of a Christmas card. She called it “Florida Snow!” which I thought was hilarious..

The Lesson Of The Day
When you are a #Photographer – your job may be to do what you are contracted to do. Never lose sight, however, on the fact that a person may hire you for your vision as much as your technicality. In a world where it’s becoming easier and easier to do this.. it’s those that take a deep gulp, step forward, and present their voice in the conversation that will get the win.. Take a moment.. take a deep breath.. and suggest your idea.. you would be so surprised.. they may like it..