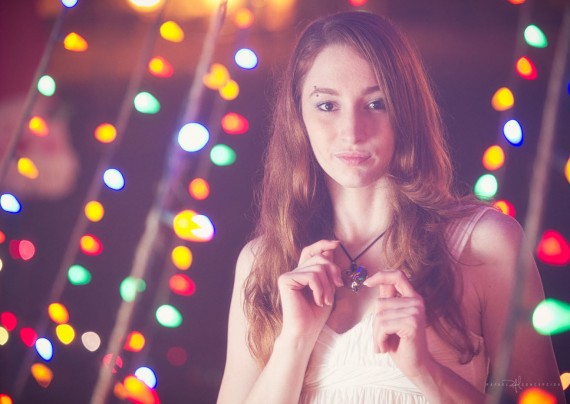 Not too far from work in this old Flea market they put up this big Christmas tree made up of lights. As I drove by it a few days ago, I thought it would be cool to have a cool Bokeh shot of a person being surrounded by the lights. This meant that I had the idea, and I have a model that i’d like to try this with, but before I actually go out and actually give it a shot with them, I wanted a stand in to come in and take a shot.

Thankfully, my buddy Justine doesn’t live too far from this place and is always willing to help. Justine’s trying to start her own kind of modeling thing, and is interested on both sides of the camera – #modeling and #photography . This means she’s always willing to come learn.

We tried the shot – and frankly, while they were cool, It wasn’t what I really wanted it to be. She looked great.. but it just wasn’t what was in my head. That said, Justine was still smiling and willing to hang out while I test. I figured I’d try making something different for her while she was there.

I told her to walk into the center of the tree and turn back to be. I was using a SB900 on a Westcott Apollo Orb, which up until this point was pointing at her. Rather than keeping it all on her, I turned the orb slightly towards me to have some of the light spill on top of the lens, creating this wash over the image. A couple of quick snaps, and we were good to go.