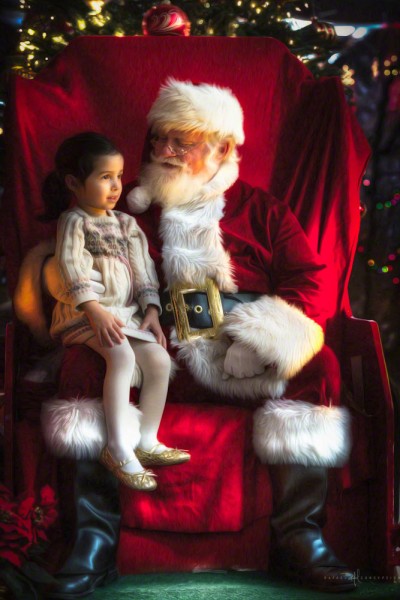 One of the things that I’ve always loved about working in photography is the amount of latitude that you have in doing it.  I love working on creating great portraits as much as I enjoy creating things that resemble works of art.  Ever since my daughter Sabine was born, i’ve been getting more and more into holidays, Christmas being prime.  For quite some time now. I have been wanting to make a portrait of my girl and Santa – in a very Rockwell-meets-Kinkade-meets-CocaCola Santa- meets Polar express.  Something that harkened to one of those beautifully drawn childrens books.

Through a series of good fortune, I had been researching local Tampa Santas for a office project I wanted to do.  This one in particular – Santa Bill, was not available.  He did tell me, however, that he would be at the Oldsmar, Florida Flea Market, at the very last aisle and that I could stop by and say hello. 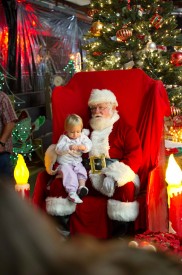 I really liked what he looked like on his profile page, so off I went to visit.  This was such a surreal experience.  The Flea Market has these wide aisles with chain fence guarding empty spots, while others sell their wares.  Passing aisle after aisle I got to the very very end of the Flea market – an anemic song coming from a small stage.  Just past the stage was the last aisle in the market, many of the stalls wrapped in cellophane or chain fence.  There in the middle of it all was a big tree, a red chair, and the most amazing looking Santa i’d ever seen.

There were some people there wrapping up a shoot, and a photographer had a softbox aiming at him with very simple directional light (the picture on the right was just a quick scout shot checking the environment for an angle).  It’s always bothered me that parents go to the mall and pay such a big amount of money for photographers to give them such a mediorce mememto of a great memory.  It’s like you’re being held ransom to the moment, and you’re paying for Access to Santa, not for the moment.  This guy was really really cool.  A small sign said 5×7 pictures were 5 dollars.  Santa Bill and I had already exchanged emails so we chatted a little bit, and the photographer told me that I was more than welcome to fire off a couple of shots if I wanted to. 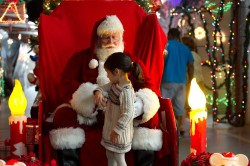 I told Sabine to go over to Mr. Santa, Introduce herself, and tell him what she was thinking she wanted for christmas.  While she was starting the intro I took a couple of wide frames and noticed that there was no way to include the two candles on the opposite side of the chair without including the empty booths, people, and the big white tunnel leading to the parking lot.  There was a christmas tree behind him, and the yellow lights from the fake candles were spilling into the picture.  That split second, I realized that the picture that I was looking for for so long was staring right at me. 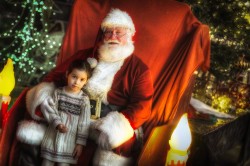 I set the camera (D3S) to 1600 ISO and fired off a bracketed series of images.  I noticed that at the lowest exposures, the yellow was really deep on the edges of the red chair, as if it were firelight.  The textures of the dress sabine was wearing, the Santa softness.. all of this would lend itself to a cool bracketed frame. I quickly composed the shot vertically and fired the frames i needed in the bracketed series. The picture on the right was a quick process I did to show the people over on my Google Plus account how cool this guy looked!

The photographer never took her shot – but I gave him a twenty.  I also told Santa Bill that I would return this Saturday with a picture that would show him just how amazing he was, and how happy he has made both Sabine and I by simply being at the very end of the Flea Market street.

You find interesting miracles in the most peculiar places. Im so happy I did.