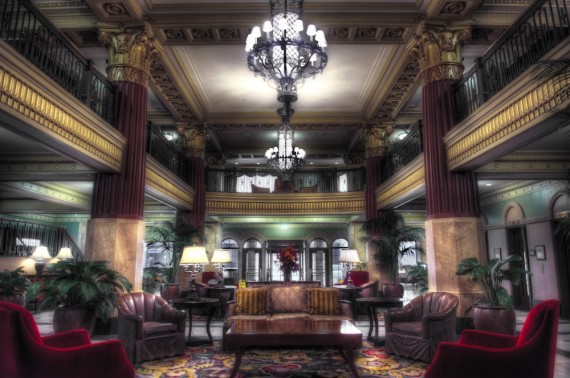 Early this morning I was working on a print sale for a client that called me about a couple of images. As I was looking over the files – I started thinking about one of the most common things that I think people overlook when working on multi toned images – HDR or otherwise.

Not enough Data. In The HDR Book, I wrote about something I like to call “Shooting For The Basement”

On Bracketing
Prior to doing all of this HDR Stuff, I was someone who always went out and bracketed my shots. Bracketing is a technique that has existed for a very long time – devised to be able to hedge your bet on a scene. When you shot film, you stepped onto a scene and said “OK.. I think this scene is about 125 at F8” and you made the shot. By the time you finished the roll, took it to process (or did it yourself), waited for the prints, and reviewed them, you had no idea if you got it right. More importantly, with so much time passing between shoot and print, how could you accurately remember what the details of that moment were? (This is where digital makes it so much easier than film ever was. that learning curve has been pretty much flattened).

So .. you’re out at the scene, and you say “OK.. I think that its 125th at F8.. but just in case.. im going to take one at a specific exposure – underexposed. Oh.. and just in case, i’ll take one of these a little overexposed too”. This meant that you spent three shots.. but at least you’d be more guaranteed of getting a keeper. Who knows then that scene would present itself again – so it was worth the investment.

This reminds me of a story Jay Maisel often tells, of a conversation between Arnold Newman and Eliot Elosifon – two amazingly incredible photographers of our age. Newman asks Elosifon about how to get great exposures, and Elosifon goes through teaching Newman this big process. When Newman asks “Ok.. so with this process .. this will work?” Elosifon responds “Yes.. but it helps if you bracket the shit out of it”

(If you want to here tons of stories like that.. check out Jay Maisels Kelby Training Classes. The man’s a legend)

Shooting For the Basement
Ok.. so now you’re in Digital. I’m still the same shooter – still bracketing to hedge my bets. This time, however, I dont have the limits of physical developing in my way. With software, I have the option of taking the best portions of the scene and merging them in – whether I use HDR, or whatever type of mapping out there. The only problem is that with Digital, a lack of information can wreak havoc on the finished image.

So.. these days I make sure that I shoot enough of a bracketed series so that I have as much of the tonal range as I can. Because I shoot a NIkon, I can set myself to capture as much as 9 frames of exposure, giving me data at the lowest exposures that looks like there normally wouldnt be anything. Shoot as low as you can.. even if it looks like there’s almost nothing there. You’d be surprised.. there almost always is something there.

So.. in bright scenes, I can almost count on shooting about 9 exposures. This also helps me when I need to go back to an image (HDR or otherwise) and I need to mix in another exposure (you know.. people did this entire HDR thing with layers for a long time). Having all of those files as reference makes for a great image.

RC You’re Making Too Many Images
The biggest complaint I hear is “RC.. so now you have 9 frames of a shoot. Don’t you find that when you get home you have thousands of images that are just unecessary? You’re overshooting this”

Actually.. no. The best thing that you can do in a scenario where you shoot 9 frames is shoot those nine frames, and move on. Cant tell you how many landscape photographers I know put their sticks down on a scene, meter, focus, and take 60 shots of the exact same spot. For me.. I setup, bracket, take 9 – and move on. In this instance, it’s a lot less.