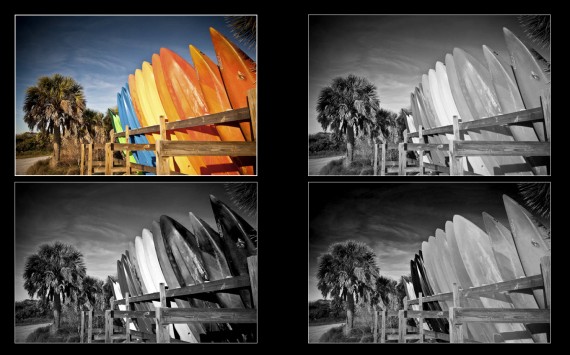 Saw that there was some conversation on using the Nikon set to Monochrome when shooting the earlier image, and how this can benefit you. Figured this was a good photography and tech topic, so I’d just elaborate a sec.

On my Nikon D3S. When I set the Picture Control, the camera desaturates the image – akin to taking your vibrance and saturation slider down to 0 (_as far as I can tell_). The RAW file is written with all of the color information, but the JPG preview in the RAW file gets the Picture Control special sauce .

Here’s the thing: I think Monochrome can suck when it comes to toning the image. In this respect, I turned the camera to black and white to just give me an overall feel for where I was going. Often times, the black and white of an image is referred to the Bones of a photograph, and in this case, I just wanted to see if I was close to capturing the spirit of what I wanted to do.

I 100 percent much rather have a full color image that I can tone to black and white than to have the camera just suck the color out. In earlier version of Photoshop, people used Channel Mixer set to Monochrome to achieve an effect. You’d mix portions of the channels to give you a completely different black and white shot. Now you can do this with Black and White Adjustment layers and targeted toold, or things like +Nik Software Silver Efex Pro (which I use religiously)

IMO – thats the fun part about black and white. The absence of color isn’t really a hinderance in that you can do sooo much with where you put the tonality. Its like a blues scale in music. Simple.. but when wielded the right way.. totally hair raising.