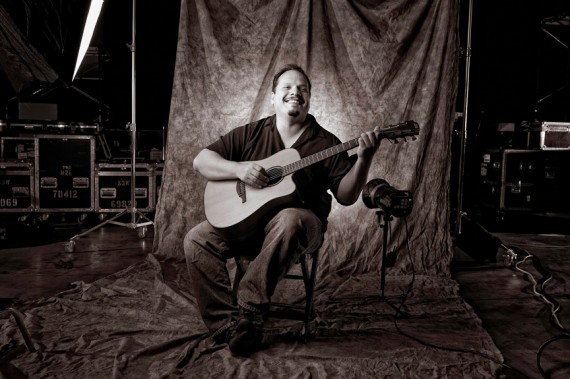 My Entry into “Photographer, Musician, or Both ”

Earlier today, +Matt Kloskowski had posted a picture that was done of him in a +Scott Kelby series of Photography folk that are musicians as well. You can see the series over on his site:http://bit.ly/wpaZ8o . Made me think of a (long) story:

Me and Music
It’s kinda wild – because while I love playing around with music, I cant read a note to save my life. I’ve never really gotten to learning how to read music,which always really bothers me.. because I love to do it and listen to it… a Lot

As Matt would pretty much tell you – I listen to a really odd set of things. Matt’s usual response to something that’s playing in my office is “What the @(*&@(*&@ are you listening to now” (and believe me.. it never gets old.

When I Was A Kid
It started waaay back in Junior High. Back then there was a shot called “Beauty and THe Beast” with Ron Perlman and Linda Hamilton- the girl from Terminator. As a kid, I didn’t really fit in – In the Bronx, I grew up right in the middle of the Hip Hop explosion in the bronx (My older brother Dave, Me, and my baby brother Tito were all scratch DJs – go figure) While thats what I listened to and did publicly – in Private, I was listening to Iron Maiden, Credence Clearwater Revival, and Classical Music. My dad had tried very early on to foster playing piano with me, noticing that I did dig a lot of music, but I never really got behind it.

So there I was, watching this show, and this episode talks about this kid who likes playing music that they feel (or something),.. and in the middle of it the kid breaks into Moonlight Sonata.

As much as I loved everything around me.. that moment it all just felt like Noise – like a bunch of people having all of this pointless conversation.. and this sound just cut through all of it and justspoke to me. I felt this need to just get to a piano and just try getting back to that moment.

College and The Phantom

A few months later, I would be up in +SUNY Plattsburgh . At the top floor of the Myers Fine Arts building they had all of these piano practice rooms. All of these rooms – soundproofed and with upright pianos. Id go get my lunch at the cafe, and run up there every free moment I had and send HOURS playing with ideas and learning stuff I was listening to on a CD player. To date – its some of the most peaceful and soul filling things i’ve ever done for myself.

I got pretty good at playing around Beethoven, some Schubert, and I even attempted some Mendelssohn and Chopin.. but didnt get too far. Pretty soon I felt daring enough to play in a public spot. The college center had a room called “The Blue Room” with all of these squishy blue foam couches. People would go there and nap before the next class. In the very corner, there was a fireplace with a piano behind a screen. I’d sneak in there and play piano for a bit.. and people would occasionally clap. Until I walked out.. lol

In college, I dressed head to toe, in all black. Black motorcycle boots, long black trenchcoat, long earrings, and a bandanna (I actually wore a bandanna and earrings for as long as I can remember.. it’s only really been about 4 years since I took them off to look more mainstream – and I kinda hate it) . So this guy would pop out, and I remember one girl saying “I could swear I wanted to go back there to see what you did to the guy who was playing for me”.. which was odd.. but funny..

Moving To Acoustic
As much as I loved playing piano, I felt like most of the stuff I did rolled off my left hand and went into my right, making my piano playing very formulaic (my own assessment). I loved playing Yanni, Enya, and all sorts of New Age – and I felt like I couldnt grow too much from what I wanted to do.

At the same time, I was really big into Blues music.. so I figured.. “OK.. lemme take up the acoustic guitar. This will work my left hand, and get me more syncopated and challenged on that side.” My first project was to try and learn Eric Clapton’s Unplugged Album. From there I moved to Alice and Chains and Dave Matthews…

.. and thats kinda where it all dropped off.

The Abrupt End – and Little Starts
Work, Photography, Life all contribute in one way or another to getting in the way of actually playing. I love listening to more movie themes (Think +Hans Zimmer kind of stuff.. I think he’s phenomenal) in that it makes me fantasize about all of this music that just swims around in my head looking for ways to come out.

A couple of Months ago, I was walking around stressed as stressed can be. My wife and child were out of town, and I found myself at home with our old upright piano (the one from the “Proof” video:http://youtu.be/gVR3dGK1MwE ) . Shutting everything down, I sat and started noodling on Mendelssohn’s OP30 No6. Amazingly enough, i could just feel the stress melt away, little by little.. and a charging that I havent felt in a bit just occurred. It was such a cool feeling. A couple of weeks later, i’d surprise +Brian Matiash by showing up to an event he was doing in NYC and noodling on a piano there before (embarassed) runing out.

But it felt cool. I felt connected to music again.

Someone not too long ago asked me if I had all the money I ever needed, what I would do. Immediately – I thought to a big room with all of these instruments and my camera. Just sit around all day and noodle on music and photography.

Then come down and share all of it with everyone else. The other truth is – I love teaching this stuff on a crazy level.. so sharing with it all of you would be part of that joy.

And I get to do this already. How lucky am I.