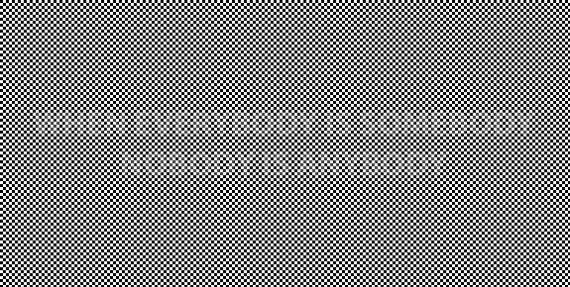 (update:  There has been some great comments and conversation about this topic on Google+ – make sure you go read their comments there and join if you’d like)

A couple of weeks ago, I reconnected with my friend J back in NY over a couple of text messages.  J was this person who I loved having late night chats with about all sorts of things – from Middle Eastern studies to future technologies – the conversations were always wonderful.  Life gets in the way and these conversations slowed to a drip.  It was great to hear from her.  Immediately I had asked her if she was online somewhere – perhaps Google+ so we could keep better touch. Her response was that she had stopped using these channels.  When I asked her why, her response was what left me thinking..

“..Felt like this seamless sharing crap is just throwing users under the bus for bigger valuation.”

I thought about what J said over the next few days, then stumbled onto a great documentary on the new digital age called Press Pause Play.  This documentary, filmed last year, talked about how the advances that we are seeing right now have taken us to a point where being an artist that produces music and film is entirely reachable – creating this huge crush of artists on the internet space.  With everyone clamoring to be the best artist, the field is full of noise – leaving the best in the field, swimming in a sea of mediocrity.  Add to this Saturday Night Live’s skit “You Can Do Anything” and you have an amazing portrait of where we are at this point.  After watching both of these, I started looking at the sea of tweets, posts, and comments in my space of digital imaging and technology, and wondered how much of this held any merit.  To be honest – I still don’t quite know how I feel about it just yet.  But, I do know that there were some things that I wanted to change for myself. 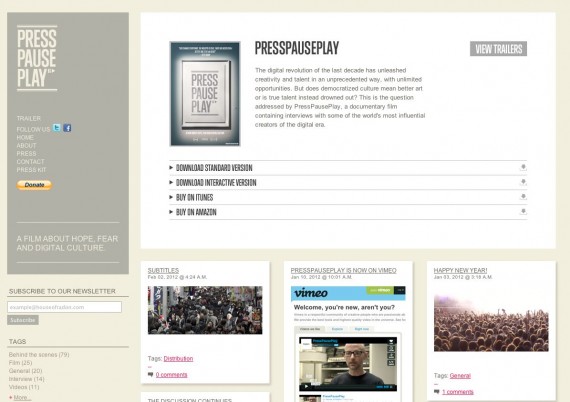 I love the creative environment that Google+ has brought to the table (im on Google+ over here).  I feel like there is an incredible community of artist there sharing and talking, and I believe that this is great for inspiration and growth.  What I did notice on there as well was a reshuffling of the Social deck – so to speak.  People who I long followed on things like Facebook and Twitter held fractions of an audience in this new space, while entirely new players started gaining incredible mass – faster than any other platform had given them before.   In the middle of all of this I started noticing that the currency of all of this was in followers – just as it was in Facebook and Twitter. As the legions of people were added to the coffers of the new social circles, I started noticing that the attention on the platform started getting more associated who was recommending you more than what you were actually saying.  It became less and less on what you were sharing, teaching, or giving, and more what “list” you appeared in.  Little by little, I felt that the message was inexorably tied to the mass that a person had rather than the masses flocking because of the message.  Earlier in Google+, there was this talk about whether Google+ was suffering from a “Gatekeeper” syndrome.  I still don’t think that’s the case – but I could totally see where a person would think that, if they came upon the site. This entire process gets endlessly complicated as we start using our “Good Job” and “Great Stuff” or “Let me tell you what I think” as food to attract more followers. 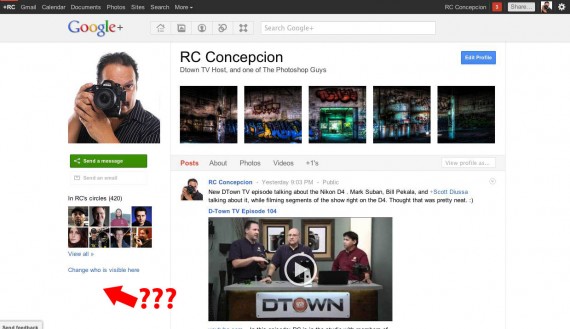 A few days later, I was sitting around talking to Jason Joseph on Google+, who had noticed this as well.  In a Google+ hangout, he relayed to me the story of his father, and how well he was respected in his community.  He noted that his father never really mentioned this- and only came to hear of this after his fathers passing.  Finally he stated that his father, were he here now, would look at him and ask him what importance would there really be to the amount of people that followed him.  Why would he really care about the people that are watching.. that’s not why you do what you do.

His solution:  He went into his profile, and hid the number of people that were following him.  In doing this – you could not use how many people follow him as a metric as to whether or not you wanted to listen to him.  You could only make that decision based on what he actually said.

I went into my Google+ profile and did just that.  Now, it’s not really relevant who is following me.  What I say is the only relevant part.  This, I feel, can help de-clutter a little bit of the noise I may have been contributing.

Sharing Me: Inspiration and Pride

The second thing I started thinking about is what about the things that I am sharing socially.  For the most part, there are three types of things that I try to share in my blog and on social networks. 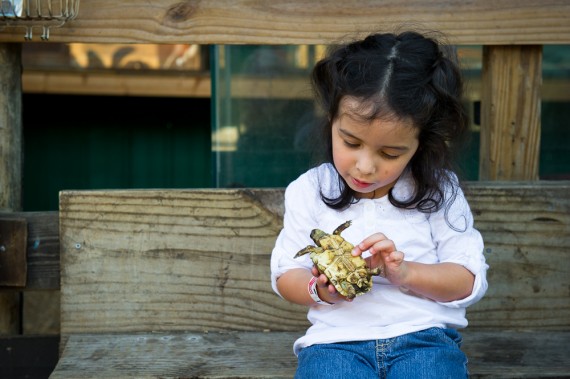 (an accurate description of what I feel like sometimes. Not just ‘wrapped’ but powerless. Fun tho 🙂 )

Things that tell you a little bit more about me:
Obviously I can’t have everyone over for coffee, but I take an interest in being able to share the fact that I am just like everyone else out there. I am absolutely in love with being a dad, and I spend a lot of time showing the cool little daddy things that I get to work on for fun.  I put my pants on the same way everyone else does, and “how I roll” is prey to the same things that everyone else faces out here.  I appreciate any attention that someone may give me, but I would never want it to be inspired by my lifestyle.. I want it to be inspired by what I can teach. What I can share.  Thats the measure I want to be remembered by.

Singular Things That Inspire Me:
I keep very very weird hours, and work on 1000 things at once.  That said – I can find it almost impossible to be able to tell you “These are the following 500 people that I draw inspiration from.  Here.. have at it”.  I think it’s ludicroous to believe that you can do that, and be completely sincere on that.  Again.. I fall back on my being a teacher.  I would find it a big disservice to anyone who would want to learn from me to say “Ok.. stand there and open wide” and open a fire hydrant and aim it at them.  I dont learn like that.. and you probably dont either.

Instead of telling you about 500 people that you’ll almost certainly not follow, let me tell you about one thing that I found that was great.  One thing that I found funny.  If I am going to recommend a person for you to check out, let me not bury that person in a list of 300.  Let me tell you what that -one- person is worth looking at for me.  If you agree with that analysis, you can follow them.  If not, you’ve at least learned something about that person.

Tips and Tricks I stumble On

I have the privilege to spend my days working on developing cool ways to teach on things in the digital imaging and web space.  This means that we get to hear all sorts of little problems, and work on solutions for them.  Sometimes, they are just things that dont really need to be involved in an entire class – they’re just tips that would make peoples lives easier.  In that, I can’t wait to just fire up the computer, and record the little tip to share for everyone.

What I Do For A Living

Going back to privilege – I feel so lucky to be able to work with someone who epitomizes all of this –Scott Kelby and Kelby Media Group.  Not only do we spend an incredible amount of time solving problems and providing free stuff, we also spend a great amount of time designing training for you that is quick, to the point, and focused on exactly what you want to learn.  Because of this – I am completely unabashed in telling you “Go to Kelby Training and sign up.  It’s the best money you will spend on training”.  I won’t obscure this message as this is what allows me to do what I do . I’m extremely proud of it, and feel completely happy to espouse it to anyone who listens.

What This Means For You

So now that i’ve gotten off my chest what can you gleam from all of this?

On your Website or Social Media circles – do you talk about stuff that interests you or do you just talk about things for the sake of drawing attention. The people you want to reach will appreciate sincerity. Theyre going to want to know as much about you as the quality of work you can produce.  Think of this as a job interview- so long as you’re cool.. it’s cool.

Do you find yourself following, friending, and circling hoping for an exchange?  Leave that behind.  All of the time you spend chasing that tail, you could spend focusing on creating something that you can put onto the world that will bring people to you.  Rather than hope for sharing power, make power.

Dance like no one’s watching..  but if you’re Dancing the salsa – make sure its the salsa.  The best way for you to put your best foot forward as a person who shares great things is to stop sharing everything, and share selectively.  If you dont believe 100 percent in your picture, believe me, people can smell that.  Trust me, Ive learned this the hard way.  That said – want an instant pass?  Any experimentation you do with your iPhone (or other mobile phone) is never really counted against you. 🙂

Remember when you had to call someone to tell them Happy Birthday?  A long time ago, when you got a call from someone, it totally made you feel good.  Now on Facebook, you click a button, you see how many peoples birthdays happen today.  Type “Happy Birthday”, press Copy/Paste several times.. done.  Frictionless.   What did that do to the concept of someone wishing you Happy Birthday.  Now, everyone wakes up to a bevy of Happy Birthdays on Facebook – and for the most part – they have a much lesser meaning than when someone took the effort to do it in an email or a phone call.   Thats exactly what it’s like with a “like” a “+1” or a RT.  If you think about how easy it was to do the happy birthday, you’ll sober yourself into realizing just how valuable your +1 can actually be.  If they come, great.  If not, that’s fine too.  You’ve got bigger things to think about.