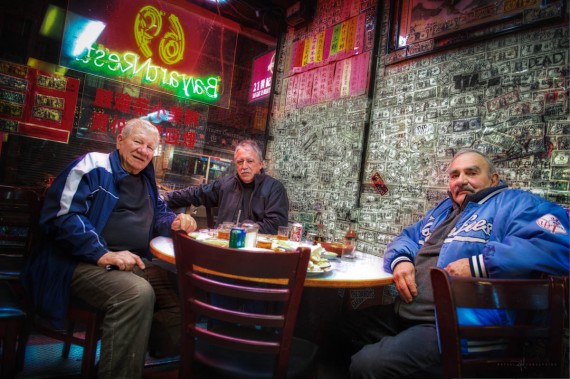 So. It’s Valentines Day in New York City, and i’m doing some meetings.  Rather than retire to my hotel, Pizza in hand, to catch up on the latest episode of “Disaster Preppers” I made it a point to reach out to Peter James Zielinski (also follow Peter on Google+) – an Actor/Photographer living in the city.  I’d been meaning to meet up with him after chatting a bit on Twitter, so I threw out an invite to go to one of my favorite places to have a mean in the city – Shanghai Cafe in Chinatown. I fired a tweet to Peter asking if he’d meet me for some grub and Peter quickly obliged.

Dinner was pretty cool. I was able to catch up and hear some great stories as to how this Actor is doubling up as a Photographer in the theater scene and making a go of both of his passions.  Much laughter ensued over soup dumplings, and we shared stories of clawing our way up to where we are today.

After dinner was done, I wanted to just take a walk around the area and just feel around for a picture.  There was a slow drizzle beginning to pick up, but I had this idea that somewhere in this little criss cross of Little Italy and Chinatown.

As I rounded Mott street onto Bayard I noticed that there was a little chinese restaurant with very interesting glow to it.  Whenever I work on a picture, it’s almost always motivated by some music that I am hearing in my head.  A couple of steps onto Bayard Street, I immediately had the original version of “Woke Up This Morning” by A3 (They used a part of it for The Sopranos) ringing in my head.   Right at the front of the store, in front of a very big window were three gentlemen finishing up their dinner for the evening.  I knew that I absolutely wanted to make this picture – at least give it a shot.

I walk into the restaurant and start working on my best absent minded professor bit.  You see, everyone has a way to get a situation to work into your favor as a photographer.  This is what I call The Photographer’s Bedside Manner.  The best photographers out there know how to size up a situation without you even noticing it – and use all of the people skills that they can muster to turn people to their favor and get the shot that they are looking for.   With Peter in tow we bound right into the back of the restaurant, slack jawed with amazement as every single piece of the walls in this place is covered in single dollar bills. 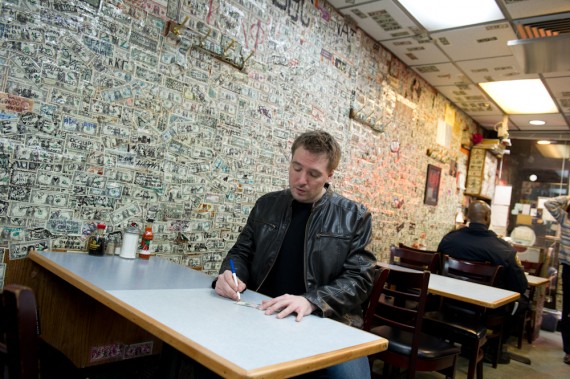 There were only three sets of people in the place: The gentlemen sitting at the front of the restaurant, a family in the center, and a lone Beat Cop eating a late dinner.  I continued to gush to the chinese waiters there “Oh my gooodness!! Look at all of these dollars!! Can Anyone just give a dollar to do this?!  This is Amazing!! Can I put up a 5 dollar one up there?!” and their nervousness of having two guys with a very big camera transformed itself to one of those “Oh goodness this guys an idiot tourist.. he’s cool”.  To me it didnt matter.. while I was doing all of this gushing, I was making sure that I was deep into the restaurant, looking at the angles and positions of where to make a shot, considering exposure.. and letting the ‘real’ picture that I was trying to make – get a little more accustomed to my being there. 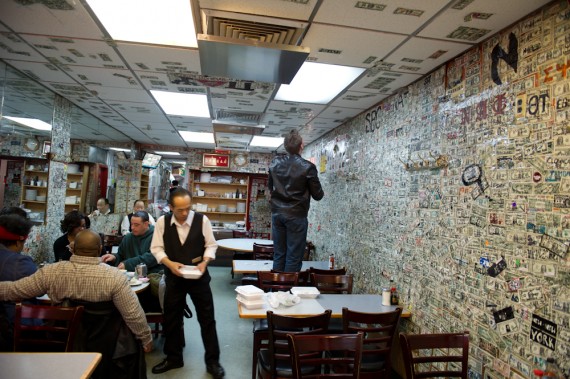 We signed one dollar, and ceremoniously showed it to the people there.  Then we doubled down and pulled out two 5 dollar bills and started writing on them. Figure this would give me a little bit more time to assess the scenario. I asked Peter if he would be so kind as to (slowly) tape each of the bills to the ceiling.  As he started this work, this gave me a chance to slowly move to the front of the house and start the conversations with the gentlemen.

A couple of quick off the cuff “yeah.. this is my hobby, I just love taking pictures” got me a quick counter.

“Where you from?” the man in the center quickly asked.

“Oh me, I’m from Tampa Florida – That’s where Fun goes to Die.  I’ve only been there 5 years.  Im a Bronx boy, born and raised” – They giggled.  The joke went over ok.

The guy in to the right continued “Oh, i’ve been coming here for 50 years.  What kind of pictures do you do?”

Rather than get into a big conversation of what I was trying to do, I quickly pulled out my iphone and went to my HDR portfolio.  I found the picture of the Church that I shot the day before and just passed it around. “I do -this-” .  I figured rather than going through Star Wars and all sorts of assorted junk, a catholic church would play nicely.

(Teaching moment:  This is where my iPad and iPhone pay for themselves time and time and time again.  To be able to quickly show someone what i’m trying to do has gotten me more access than I care to say)

The guy to the right went for his glasses.. and after looking for a bit said “You take good F*()ing pictures.. thats an expensive F**&@)( camera you got there”

Not wanting to miss the moment I quickly said “Yeah.. I think it would look so cool to make a picture of you guys just like this”

After a second or two of thinking about it (which felt like forever), the gentleman in the middle said “Sure”

I had been holding the legs of my tripod unlocked in one hand so as to not wrestle with unlocking them when I was there.  The feet quickly hit the floor and I was able to lock down the tripod and fire off a series of shots in under 60 seconds.  As I was getting up, I asked one of the Gentlemen if they had an email address as I would love to send them a copy of the image.  One of them obliged.

Excited that I got the shot that I was looking at in my head I headed out the door after saying thank you to everyone.  Peter followed quickly behind me.  Before we opened the door to the street, I hear back a quick “Hey!” from the guy in the middle.

I look back over at the guy and tepidly reply “Yes?”

“Be Careful.” is his only reply looking me dead in the eye.

I nod and start walking away to hear something else come from him.

At that point, I figured it best be time to just head out..

What Am I Happy About

What I am absolutely excited in this is that I got a chance to exercise so much of my photographic muscles doing this.  Often times people think that Photography is about pressing the shutter button.  In actuality – its this art form that requires so many different skillsets to come together to get something you really want.  Whether I was successful or not really didnt matter to me at the end.  What mattered to me was that I wanted this shot, I was willing to say F it and try, and was willing to put all of what I could muster to execute.  Execution is the key.

Swimming like a duck.  Calm on top, even if your legs are frantically flailing on the water.  Swim like a duck.