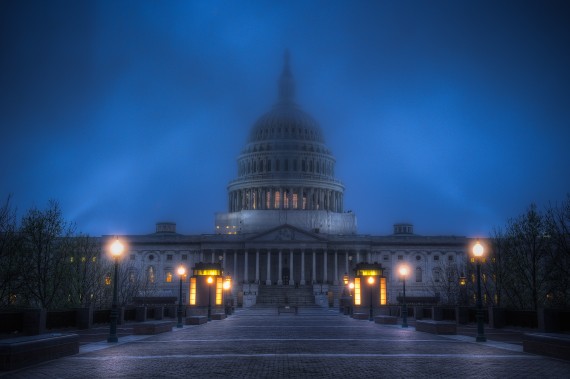 Back when we were in DC, we spent a long long night out shooting stuff in the mall. it was around 2am when we got settled in and a few people had said that they wanted to go out at 5am to get that cool shot of the sun breaking through the clouds and shining on the Capitol.

I got up and headed out to the street, only to find that no one that said was going to be out was out. Grr!! Nevertheless, instead of heading back to my room, I figured I would just go try it. I immediately ran into a couple of problems.

The sky was cloudy.. there was no chance that the sun was going to peek through.
There was fog.. which meant no clear shot of the Capitol. To tell you that I was dejected is an understatement.

Just cause the shot I wanted didn’t work, doesn’t mean im not going to walk around and try. I walked to the other end of the building, and attempted a blue hour shot of the Capitol. I figured, hey.. why not use the ethereal of the moment to its advantage. It was only until I got home and started processing the file that I noticed “Hey.. there could be something here.. ”