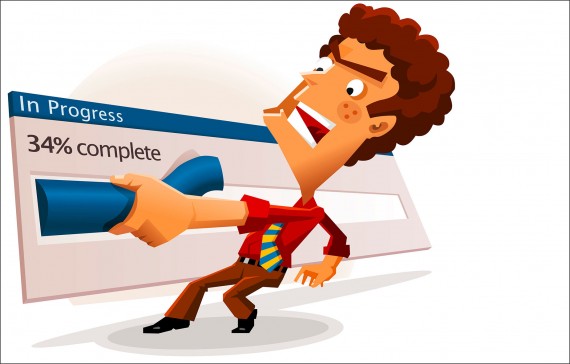 So i’m in the middle of writing this article on a couple of different backup solutions that i’ve been toying around with here at the office, then it finally comes to a head.

That problem that I’ve been trying to ignore forever. My computer has been slowing down more and more and more last couple of months, and its at a point where its just becoming unbearable for me to work. Here at the office we tend to pound on our gear pretty hard – having to test so many different applications, techniques, tricks, and whatnot. So, it kinda comes with the territory that after a little bit of time.. it just gets a little hosed.

I really wanted it to wait for a clean start when I finished playing with these drives, but this needed my attention. Now! How hard is this going to be.

Im running a Macbook Pro with a 500GB hard Drive. It has about 70GB of space left – which should be absolutely plenty. I’ve got tons of things installed – and (ashamedly so) I cannot even BEGIN to think about when this thing backed up last. At my office at home, I have a Time Machine that usually takes care of it.. but I dont even know when that thing was last updated.

This is the epitome of The Cobblers Kids at this point (you know.. its the plumbers house that has the leaky pipes. The cobblers kids that has no shoes.). What do I do now? 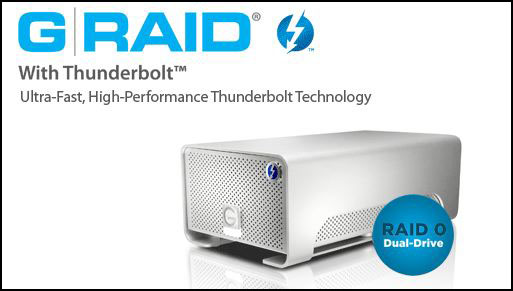 Back when I was at Photoshop World, I got a 8TB Thunderbolt Drive from G-Tech. Having a Macbook Pro and never playing around with the Thunderbolt speeds, I wanted to see just how fast I would be able to move big amounts of data.

I’ve got a bunch of deadlines… right now, getting this machine back up as fast as possible sounded like a wonderful idea to me. Out of the wrapping it went, and onto the desk. 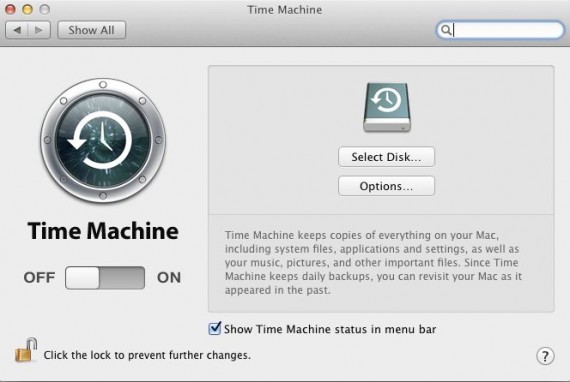 First thing I did was plug the drive in and start Time Machine. From here I specified that the G-RAID was going to be the space where I was going to keep the backup. Started the backup process and went to lunch. I figured this would be something that i’d have to somewhat monitor through the day, but by tomorrow, this would be all set. To my surprise, the backup process finished in just a couple of hours, and I was ready for the second step. Getting all of that data moved (over 400GB) to the G-RAID was my first experience with Thunderbolt, and i’d be lying if a bit of me didnt do that a caveman growl at the power of Thunderbolt. 🙂

Because we tend to beat on our computers and do Beta testing, we tend to expect to have to get up to speed very quickly. For this purpose, I have an installation that i’ve done of Mac OSX on a removable hard drive. On that installation, I put all of the things that I would need to get to work on something as quick as possible (Mail programs, screen grab software, encoders, Quicktime stuff, Text Editor). This way, if theres a problem, I can either copy that installation to a new computer or (in absolute worst case scenario) boot from that drive and work. In this case thats “Image0” and it sits in a drawer in a safe place. For this part, I booted to that OS on the removable disk, formatted the computer hard drive, plugged it in, and cloned it to the Macbook Pro drive. This drive is a FW800 drive.. it took a bit.. not nothing entirely too bad. I was now back to a plain Vanilla system. From here, I could reinstall all of the programs that I needed to work (CS6 versions of the Creative Suite, Browsers, Lightroom, and Office).

What About All of My Data?

Now that I had a blank system with OSX installed, I could go back into Time Machine. Once Time Machine is open, you have an option to browse other Time Machine Backups that have been made that are in the area. In this case, The G-RAID was plugged in, so it was able to see that the old computer backup was there. Click on that one, and we’re going back in time! 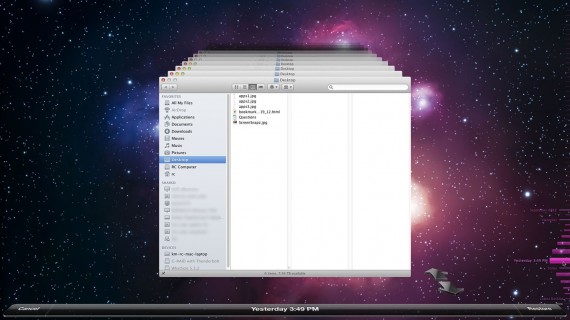 At this point, I am going back in time until the last backup that I did that was good. This is the beautiful part of this. it keeps all of your backups there as steps. clicking backwards and forwards gets you back and forward in time to see those files.

Once you find the folder that you want to restore, click on it and select Restore To. Specify the new location on your Present Day drive, and you’re good to go (Obviously after all of the data is moved back). This is a process that’s going to take a while, because I find that Im always doing a little digging around to see if I may have indadvertedly saved a file somewhere I shouldn’t have.

Back It Up Now! 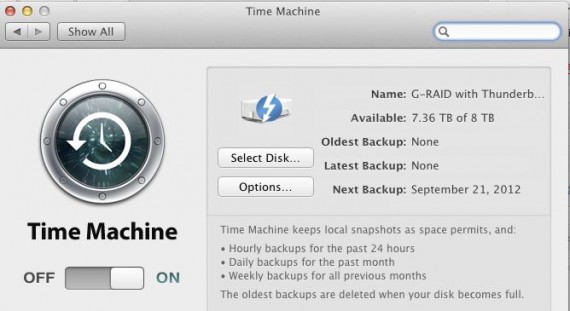 Once I have all of the information back in the spots where I need it.. im all set. At this point, It would be a good idea for me to back this thing up again.. and make sure I dont run into this problem. Its probably a good idea to just leave this drive connected here and let it do its thing when I am not using the computer.

Why Did I Stop In The First Place? How Thunderbolt Helped

The biggest annoyance for me using the Time Machine was really the wireless part. I hated working on my network at home (or playing my Xbox, surfing the web) and noticing that everything started choking in terms of speed. It got to a point where I would say “Ok.. everything sucks in terms of performance.. I MUST be doing a backup. I’m sure that there are a lot of people out there that do the same thing (I actually hear it a lot when I talk to people about backing up).

So.. the inconvenience of that moment in time .. over time.. led me to be a little unprepared for this (For the record – I did have a full backup of the computer as a clone.. just not as fresh as I could have made it.. it was about 8 days old.. but not on Time Machine). The files that sit in this machine are my livelihood, and worth putting something in place to safeguard that. I figured this drive would be a first defense on doing that. Having a backup copy setup on a Mac with Time Machine is a completely viable first step solution for someone starting off with a backup.. you at least have days of preparedness, should that machine decide to give up a ghost. Is just having a Time Machine perfect? Maybe. Its up to you to decide that.

I’ll tell you this.. i’m happy mine runs on a Thunderbolt.