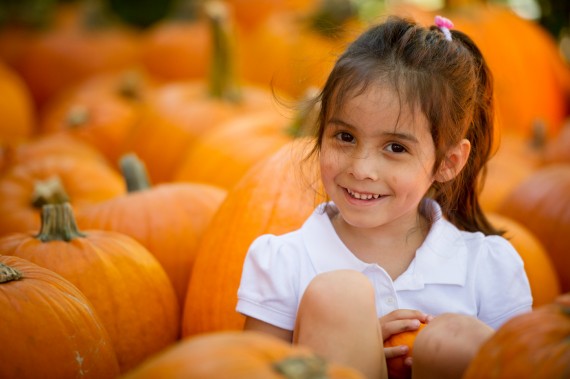 My Daughter Sabine In Front of Pumpkins – 2012

The Back Story: Dappled Light and Orange Netting 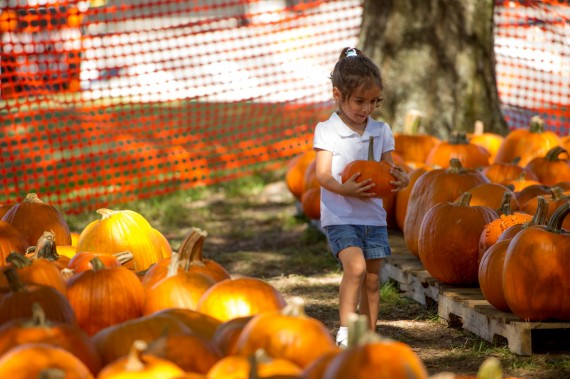 Over the weekend I decided to take my daughter pumpkin picking and tried to make a shot of her doing so. When I got to the location I noticed that the entire pumpkin patch was surrounded by a big orange fence. This meant that whenever I try to make a shot of my daughter, there was no way that the netting was not going to be in the way. Combine that with the dappled light coming through the trees in the middle of the day and I knew that I was not going to get really really good shot unless I started making some quick changes.

I figured, rather than making the changes and making a shot, i’d talk you through the process here on the blog:

Tip One:  Seek Shade & Get Low 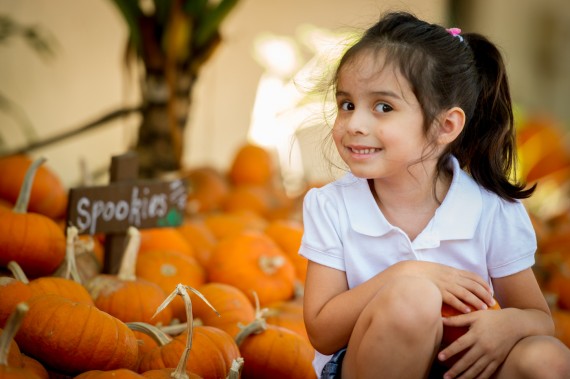 One of the biggest concerns one of the biggest problems that people make when they try to take pictures of kids is at the shoot from a much higher vantage point children are really low so what you need to do is you need to make sure that you get low with them if you’re not getting dirty you’re not making a shot. In this picture, I was literally laying on the floor with my 70-200 lens supported by my elbows on the floor.

This brings us to shade.  Whenever you are in the middle of the day, the most important place for you to be is in the shade.  A high sun will just make things very sharp and contrasty.  To get saturated colors, I will usually look for shooting in cloudy days.  Or shoot in the shade.  This was in the middle of the day, yet the overhang of the tree and the corner of one of the church buildings offered a great shaded area from which to really get some saturated pumpkins.

When shooting the pumpkins and you dont have those big rolling fields – the best thing for you to do is not to tip your hat and show you dont have rolling fields.  In the  absence of those fields, get really close to the subject that you (hopefully) have an abundance of..   in this case.. Pumpkins! Getting in tight and narrowing the focus to just your subject and the pumpkins will make the environment bigger than it actually is.

For example.. you’d never know that the dark part in the upper left corner is actually the start of the hallway for the school.  The “Sea of Pumpkins” is actually just a couple of rows deep.

The child’s face will change in fractions of a second. Trying to get a shot by just clicking once in the shutter isn’t going to do it.  It may do it sometimes, and you may get lucky.. but more often than not, you will just miss it.   More often than not im shooting in continuous high set “on”  to try to make sure that i catch all of the nuances of the face . You’ll be surprised as to how much a face will change from one small fraction of the second to another. You will be so glad you did.

Tip Four:  Keep it At the Ear

One of the biggest problems that I used to run into  when I make a portrait of children was with regards to eyes.  Normally, I am busy with the camera, and I have someone with me working as a kid wrangler.  This person is charged with making sure that the child looks over at the camera – usually a well meaning wife or parent.   You get yourself all setup on the floor and get ready for the shot, but the person that’s helping you is still standing (or sitting).

This means that every shot where your wrangler says “Look at me” means that the child will be looking up and slightly to the right .. or left…  anywhere other than the spot where you need them to look.

So there you have it… a couple of tips to keep in mind when shooting those requisite pumpkin patch shots this season.  Have fun!