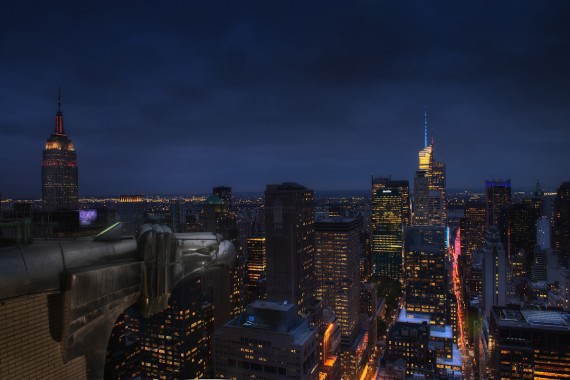 Just spent the last few days hanging around New York City for Photo Plus and had a wonderful time. It had been a bit since I had been back home and I was definitely a little homesick.  Every time I head up to NYC for Photo Plus, I like to take an extra day to try to make a shot to add to my NYC print series. The last couple of years I have made a couple of cool shots (with special thanks to Joe Mcnally for some of these), but one shot that had always escaped me was shooting from the Chrysler Building.

Aside from there being an awesome view from really high up on the building, I’ve always had this personal tug at the heart to try to make it.  I remember starting my quest on taking pictures and just marveling at pictures of Margaret Bourke White sitting on a Gargoyle making a Picture  (link of that shot here: http://bit.ly/SmAjah )or Annie Leibovitz standing on one of the gargoyles as shot by John Loengard (link: http://bit.ly/SmA5QD ) .  My good friend Joe Mcnally’s been up there as well (link: http://bit.ly/SmArXo ). To me, to follow in the footsteps of the photographers that I admire has always had a great allure, and a kind of reverence. No matter where you are on your photographic journey, its always important to look back and tip your hat in tribute to those before you.  The least I could do is try to make my own version of this location – to put my fingerprint on the shot and make it my own.

I’ve worked the location for a while, and through a set of fortuitous circumstances (thank you Matt!!) I was able to start working on getting there.  I started working on getting to the location earlier in the week, and on two separate occasions the shoot slipped from my fingers.  Dejected, I took a cab down to chinatown and just wallowed in a plate of Soup Dumplings and Boba Tea.   While I thought that it wouldnt happen, I knew that keeping hope alive on the possibility of it was a much better course of action.  Just go back and try again.

The third time around all of the moving parts connected, and in no time flat I was whooshing up the elevator to get setup for the shot.  As I got to the landing and stepped on the ledge, I couldn’t  help but just stand there and stare.  There I was , over sixty stories in the air of a city that I love so immensely, in the footsteps of great men and women.  After several moments of quiet gratitude, I went back to the bag, and started working on making the image.

I would have loved it if the weather cooperated and gave me the beautiful clouds meeting sunset image that I had in my head.  That said, Ive learned in my other times up in the air around here to not really have a specific thing in your head set in stone.  Wait, turn around, and you’ll see something you’ll like.  As blue hour approached the city, I found my chance and made my image.

30 minutes later, I was clutching my camera in my hand, smiling bigger than I have smiled in months.  I stood where they stood, and had the print I wanted in my hand.  I uploaded the take to the copyright office at the airport and started to work on my image, ever so grateful for the opportunity.