A couple of days ago, this was my sorry state of affairs in terms of wireless coverage at home.  I have been using Verizon’s FIOS for a while now.  They have great service, but Ive been noticing that the network at home just kept running slow as molasses.  I’ve always been a wired network guy, but since not being around networking and that side of tech for a while (I used to teach CIW, Net+, A+, MCDST stuff many moons ago), I wondered if the tech had gotten any better.  I didnt want to break into my ol suitcase of wiring.  After a couple of days of this I was like “Im supposed to be getting 35Mbit up and down.. ive had ENOUGH” 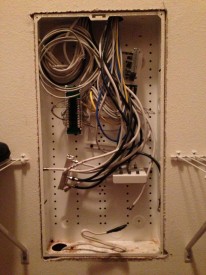 In my master bedroom, I knew that they had a bunch of cabling done, but it didnt make a lot of sense.  This is kinda what it looked like, minus the data panel on the left.  There were exposed wires everywhere and nothing was really connected.  This made me think that there was a lot of work that needed to happen to drop a new set of lines into the house.  After calling a networking guy, they estimated it be about 115 dollars a drop for each of the lines.

This made me go back and take a look at all of the ports in the house.  It appeared that every port in the house that was a phone, was actually a internet port.  Taking the covers off of all of the plugs revealed that each of these ports had actual CAT5 cabling on to it, but was only using 2 of the 8 ports.

Im assuming that they did this to just enable phone stuff, and that it would at least leave it future proofed for data.  This convinced me that I could take this on my own.  I dug out my Networking toolbag, old spool of wire and taps, and went to work.

I’m not opposed to doing this kind of stuff.  I’m just not very handy.  At all.  I once had to have someone repair a wall because I tried to hang a picture.  Imagine swiss cheese – but instead.  Its a wall.  Ask Jenn.  I positively suck at manual stuff.  I do know my limits.  This however seemed like I could do it.

I went through the house and re-terminated everything so they were set to all 8 wires.  Then I went to Home Depot and got 2 sets of data ports (thats one that I had already installed at the top).  From there I ripped out all of the wires from the phone jack and plugged them down into the data ports, testing them to make sure each connection was solid. 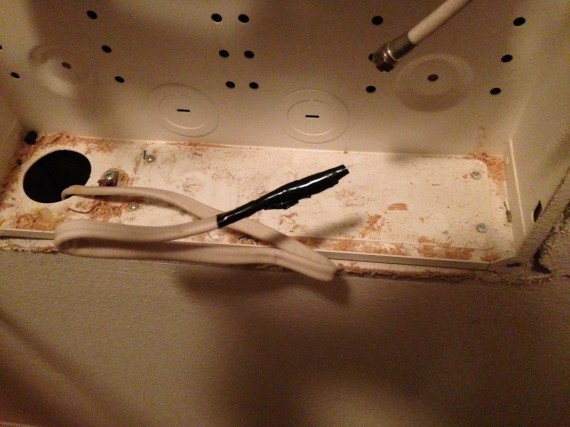 In a perfect world, I wanted to place my router and switch all in this box and have it powered intarnally.  Then I could have all of the networking stuff in one place and have Wireless Access POints and servers out somewhere else.  This cable scared the bejeesus out of me.  If i can destroy a wall by trying to hang a picture, imagine how much of a home i’d have left trying to do electrical.  Thankfully my friend Kathy’s husband Rich came by and helped me install this Leviton power outlet that came made for my box. 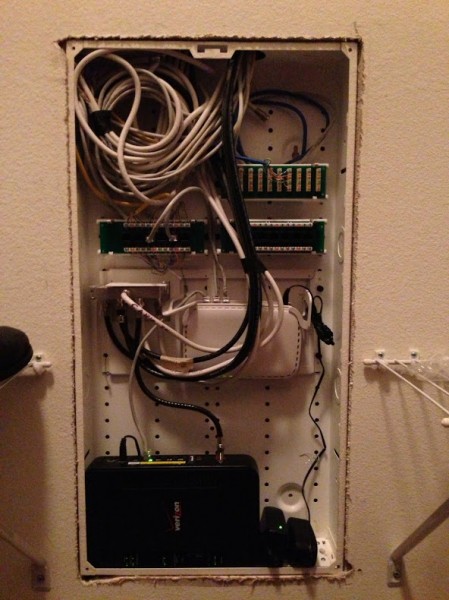 So how much does this wired connection speed things up?  Apparently quite a bit.  🙂   Now, the next step in the process is to setup the Synology DSM1812   and get a good backup going for all of these images.  As I move into the next process, I will definitely blog it out.  🙂