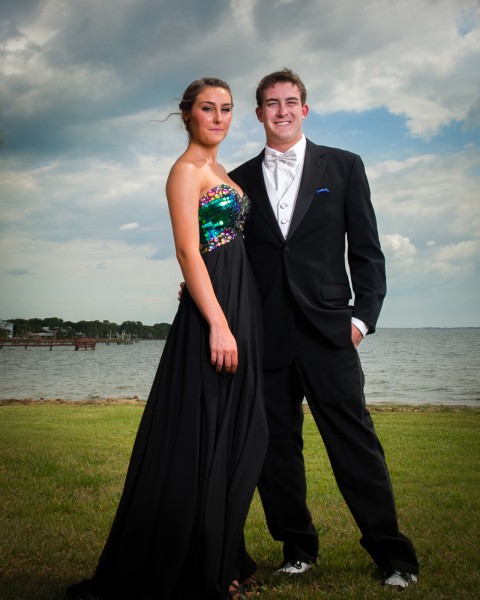 Yesterday I had the pleasure of making pictures with my buddy Alicen’s kid Kylie for her Prom.  We got to the location and started scoping out where we could shoot around 3PM.  Kylie gets onto location before her date does, and we head out to the water to make some shots.  The clouds looked wonderful this afternoon, so I switched from wanting to do location shooting in available light, to moving to some bigger flashes and trying to get something a little more ‘moody’ given the blue and greens mixing in the sky. Off I go to get one of the Priolites.

At first, I wanted to see if I could make a shot with the Coolpix A – not really for anything other than a “Lesse how this thing fares in this scenario.  While I think I could’ve nailed the mood on it, there just seemed to be a bunch of things that I was wrestling with at the time.  Because of the brightness on the subject and the brightness of the sky, it was really hard for me to get something focused in just right.   Because it was bright outside, it make it extremely difficult to make a manual focus shot as I couldn’t see behind the screen.  Add to this that the camera is a fixed 35mm and you get a bunch of extra elements in the frame that you dont really want.

Truth be told, it’s not really fair to Rank the camera in this space at all – it’s really meant to do any of this.  That said, I was surprised to see just howclose the camera got to something I would want.  In a more controlled scenario, I think I could totally eek out some shots with it, despite it being a street shooting machine.   I quickly switched back to the D3s and worked in a lens range that was a lot more comfortable.  Switching back to an eyepiece and being able to find focus fast worked, and I got shots that had a lot more detail because of it.

By this time, Kylie’s date arrives, and we are firing (no pun intended) on all cylinders ready to take some cool prom pictures.   I’ll tell ya, I am ever grateful that I have easily over a dozen years before I need to do this! #photography  Collapse this post