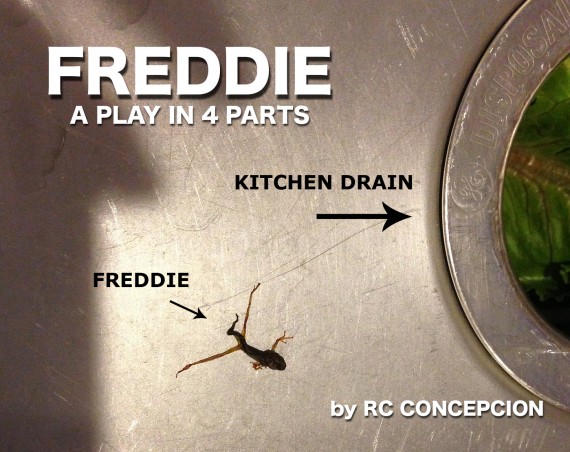 Yeah… wild, right.  The funny part about this is *we had nothing to do with this!!*  So check this story out.. its kinda odd..  I would like to present this as a play to you.. in four parts.  It’s a long one.. but just proves my stupidity.

Act I: Getting To Know You

Freddie.  Freddie was a tadpole my daughter got from some science camp teacher that thought it a good idea to let a fish live in what may be considered the Mr and Mrs. Kevorkian for animals and plants.  After several weeks of being here, he miraculously lives.. and even sprouts arms and legs..  He’s still about an inch big.  But he’s made it.  I even made an instagram of him using an #Olloclip as a Macro. http://bit.ly/15VupAt
So, up until this morning, Freddie (RIP) was living in this little tiny bowl – that only held about a cup of water.  What do I know.. he’s a tadpole!  He now has legs and arms, and now he’s using said appendages to float and swim around.
Someone tells us “you know.. he’ll need like a rock surface to hop on to and work his legs.”   That was the precise moment where we were like “Wait… so when it this precise moment where he ceases to be a fish, and starts being a frog.. cause he’ll then want to not be in the water… and he’ll want to be on land.  Of which _*he has none right now*_ ..
goes out and gets a little rock and places it at the bottom of said cup.. way at the bottom.. like a floor…under all of that water.  We throw some lettuce leaves and go to bed.

A yell wakes me up and i run to the kitchen.  There is my wife.. in shock trying to keep my 4 year old daughter away from getting a stool and placing it in front of the sink.  Right now, its placed in front of the bowl, with Sabine saying “look Mommy!  He’s gone!  Freddie is Gone!”
But Jenn knows something very different and motions with her eyes to the sink.
Apparently – last night…  Freddy decided he had _enough_ of where he was and decided to go all Finding Nemo on our butts.  He mustve leaped onto one of the lettuce leaves.. then leaped onto the kitchen counter…
Then leaped into the sink..  I mean, all drains lead to the ocean, right?
Well.. looks like he didn’t have enough to make it.

Act III: What Do We Do Now

So… we’re thinking.. what happens now?  What do we tell her.  Do we show her?  She’s still asking… and Jenn decides to wait it out until Sabine says “Maybe he just grew up and decided to jump out and leave”
We’re like “YES!!!! THATS EXACTLY WHAT HE DID!!!”
Sabine stops herself..  “But how did he get out if all the doors are closed”
We’re like “Well.. he was really small.. what if he fits through the cracks.. what if he got out and saw the pond in our backyard and said ‘I am finally home!!!”
Sabine says “Yes.. thats it!!!!”  To which we are freaked he heck out.

So.. we get home from being out for the day, and Sabine decides to go out to our screened enclosure at the back of the house.  We’re cleaning inside when we hear a “Mommy, Daddy.. Come Quick.. Freddie’s here!!!
Freaked out.. Jenn and I run out back, and we see.. by the door to the enclosure..  a frog.  About the size of a fist.
Stone dead.
The only problem? Sabine doesnt know he’s dead.
“Daddy.. its Freddie… hes a frog now and he’s sleeping!!!”
“Oh my goodness, YES Sabine.. he’s sleeping!!” I respond.
I bring her close to me and whisper “You know.. I think he’s really really tired.. thats why he’s sleeping in the middle of the day.  I really think mommy should go out there and pick him up and put him by the grass so he can go in the water when he wakes up”
( _what…. I wasnt touching no dead frog!_ )
Jenn gives me a look and I respond “Dont worry… Daddy will take him out… I’ll use this dustpan and broom.  Here, Sabine..  Put a lot of water here on this dustpan.. I think he’ll like this…. “
“… no no no.. Sabine.. dont follow me…. Shhhjh.. he’s sleeping..  you stay here while I go place him by the water on the grass… Shhh.. dont wake him… “
When I get to the water, I give the dustpan a flick….
“LOOK!!! SABINE!!! DID YOU SEE THAT!!!! Freddie woke up and jumped into the water!  I think he’s said “Im hoome!  Thank you!!  Sabine you are so very helpful…  lets go back in the house.. “
I know…   i’m going to hell.  I know it.    Stupid frogs.
2 Comments July 20, 2013