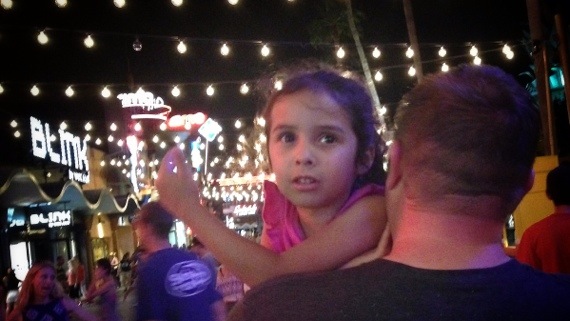 So it’s late, Sabine is tucked in bed after an exhausting day at Hollywood Studios. Figured I’d share a story why I was so excited to get her (and us) a pass to Disney World…

I’m the second youngest of seven kids. We were raised in the south Bronx. My dad was a building super and my mom stayed home. Neither of them ever went to school and we grew up very much below the poverty line. Going out to theme parks and doing things like that were just never things we could do…

One year my parents (bless their hearts) took four of us in a car from the Bronx all the way down to a Six Flags all the way down in New Jersey. I remember sitting in the car buzzing with anticipation to get to go to our first theme park. We could not get there fast enough. We had packed some lunch and were off to set a great day off.

We got to the parking area and walked over to the gate of the park. It’s at this point when the sobering reality had hit both my parents. They had never figured out just how much going to a theme park would cost. There we were at the gate with nowhere near enough the money we needed to get in. We were so young.. And my parents never really thought that we’d notice.

To save some form of face my parents staged a confrontation with us where we ended up losing our ability to get into the park. Crying at the parking lot , we ate our food and watched as everyone else got to go into the park. We finished our food, got back in the car, and headed home.

There’s not a time that I don’t tell that story that my mom doesn’t cry at not being able to give us that memory. Last years brother Carlos took my mom to Disney to right this wrong from so long ago.

We had waited very long to make sure that +Jenn Concepcion and I were able to give Sabine a great Disney experience. Last night I agonized over getting the passes. After thinking about it, I decided to get them.

Thereby the grace of our maker, I’m in a position to even try to get her a good memory. In getting them- I partly wanted to right my own wrong. What my parents lacked in money, they more than made up in love for us …. But for this moment, I’d be able to do this.

To see her walk through those gates with me and Jenn meant more than the world to me. To watch the smile on her face as she met the Toy Story characters soothed something in me that I had longed to right for so long.

To put her in bed, excited for the next day made me ever so grateful that I do what I do. It made me grateful for all of you who read this, follow me along, and give me a great place to work.

There’s not a day that I don’t think that I ever want to take that for granted. And not a moment I don’t thank all of you for giving us these memories.

Have a great night. We are going to have the best first Disney experience _ever_ .