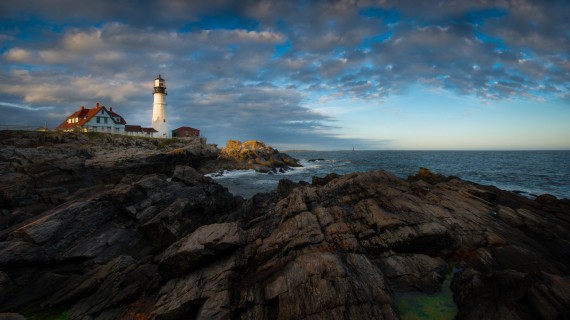 (this is a 2000 pixel shot, so i’d recommend clicking on it and seeing it bigger)

On Friday i took a quick flight up to Portland Maine to do a quick chat with the Photographic Society of America at their yearly conference.  Janet Biglake and co have a great group of people out there, and I was excited to meet so many dedicated photographers.

I was also equally excited to get back up to New England.  I really miss the northeast.  After the show my buddy Julie was nice enough to come by and shuttle me off to the Portland Head Light at Fort Williams Park.

To be completely honest – I wasn’t really all that excited to shoot it.  I mean, here’s the quintessential New England landscape – water.. rocks ,Lighthouse..   The shot’s been done a million times before – and very well I may add.  As we are driving there, I was trying to find something in my head that would at least give me a chance to put my own fingerprint on the view.  After being egged on by Julia to jump the fence (I knew I was going to.. i just didnt want to look like a Christmas ham doing so), I got to a location that I thought would give me a good rendition.

I liked how the seaweed/algae looked on the rocks in this area and wanted a color anchor down there. That became my base.  I shot it with a D800 and a 14-24 stopped down to F22.

While I shot plenty of shots where I was to the left of these rocks and to the right of them, I kept thinking to myself “Those are just the shots that I see online… They’re nice..  but I want to add to the visual history..”  Now – don’t get me wrong.  There are PLENTY of times when the shot -is- just that location.. that spot.. that footprint (take for example – The Mittens at Monument Valley.  Did you know that the most iconic shot of them is taken from the hotel’s parking lot?  Yes.. there are other vantage points… but thats the one you want.)

Im glad Julie was able to take me out to see it.  Im glad I waited till an opportunity broke for a shot i’d want.  I think all told I almost filled a 32GB card taking brackets…  But I settled on 1 picture.

That was worth it.