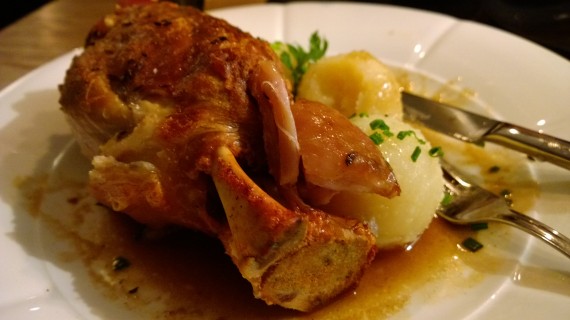 The last time I was living in Germany, I lived out east, in a town called Jena.  One of the first nights that I was out there (Completely new to the area), I went out with some folks from my department..   We went to a bar, and proceeded to order drinks and food.  Me, not knowing anything about anything.. just smiled and stared baffled a the menu.

The guys had asked whether I was hungry hungry.. or not.  I told them that yes.. I was pretty hungry.. so they recommended this.  When it came out however.. it was super super pink.  And almost cold .  I was a tranger in a strange land and didnt want to offend anyone on my meal.

So I did what anyone else would do.  Raised my glass… uttered Prost, and proceeded to consume my meal.

I was near death sick from the most amazing food poisoning for like three days.

It was only a year or so later that I would talk to some of the guys during a party when they’d say “Man, I remember you ordered something at the restaurant your first time here…  We thought you were nuts!  The food came out and was soo underdone.  We thought you’d surely send it back.  That HAD to have been a mistake.. but you ate it.!!!’

I was like.. “I THOUGHT THATS HOW IT CAME! I NEARLY DIED!”

Needless to say.. this one was superb.  A great end to the first day.