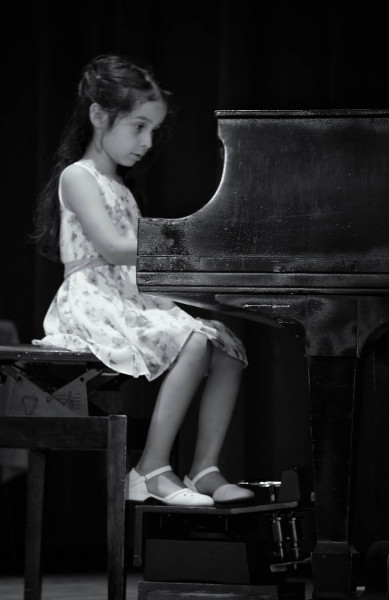 My dad would have been 75 today .  He passed away on my birthday back in 1998.  Despite not having any education whatsoever, he was a very smart individual and always into music in some form or another.  It was he who got me interested in wanting to learn to play the piano – finding a busted air organ and cobbling it together  in the house so he could teach me how to play “En Mi Viejo San Juan” (an old Puerto Rican song) with one finger on the organ.  I never took many lessons – we just couldnt afford it.  That said, my love of music never left me.

That was something that I hoped that I would pass along to Sabine.  How happy was I that about 8 months ago she started to really want to do.  I never pushed her to the piano – she just came up on it. She would go over to our old upright and start noodling at the keys.  It was then we decided to send her to classes.

She’s been at it for 4 months now, and today was her graduation recital.  My mother and brother Tito sat in the crowd, along with our friends Jay and Susan – watching her go through the motions on “Humpty Dumpty”.

When she was done – she bowed and left the stage.  I had this very strange feeling that my dad was watching from somewhere.. comfortable that his love for music is being passed on to a granddaughter he never got a chance to meet.