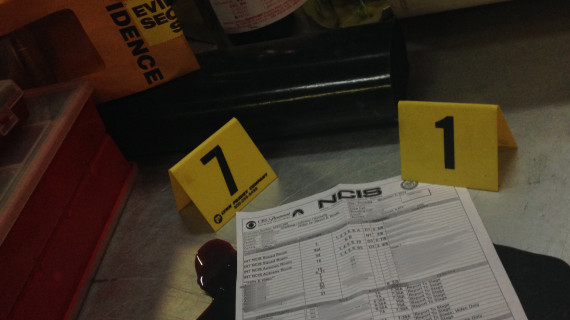 Something that many people don’t know.  When I was a kid, I had this HUUGE pipe dream about being an actor on stage.  I’ve always been so fond of the people who get to do it.  Just thought it was such a neat idea to step onto a set. Hear a director say action, and have to become someone else.  It made me pick up some theater in college.  Its one of the many things I enjoy at work with our shows.  My dear friend Mike Kubeisy (also has kick butt classes at KelbyOne)  is a Stills shooter in Hollywood for the show NCIS.  For years he’s been asking about coming out here.  With the tour stop here in LA today, i was able to come out the day before and spend some time seeing how an episode is put together. 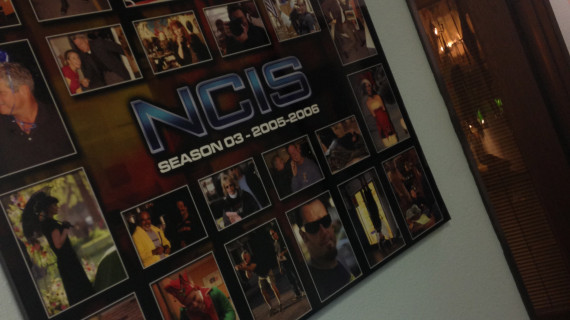 I checked in with security at the set around 615 am, and already Mike was there.  I was there earlier than I needed to be – but I remember Mike telling me something years ago, that I really really try to live by when doing things.

Mike has to get a series of still images done for various portions of the show.  He walks in and in no time flat has his cart set up and is ready to go! Everyone on the crew is extremely nice, polite – but the level of professionalism can just be felt in a place like this.  People are very committed to the finest detail, and you can see that there is a tremendous amount of pride in their work.  That was something that I thought was really cool to be around.  They laughed, they joked, but man can you tell they cared.  As they moved sets around, they setup power, they got scenes ready.  These people are juggling 40 different things..and no detail’s being lost.

If there ever was an embodiment of their love for what they do, and doing it at the top of their game, it is in Doug (keeping some names out.. i’m new to the whole set thing. They were nice to me, least I could do is give them some space).  Doug is the graphic designer for the show since its inception.  In short – every single thing that you see thats art based – signs, medals, magazines, fake products – all of that – is designed by Doug in Photoshop and Illustrator. The Caf-Pow drink? Doug.  It was impressive on a level I find hard to explain. 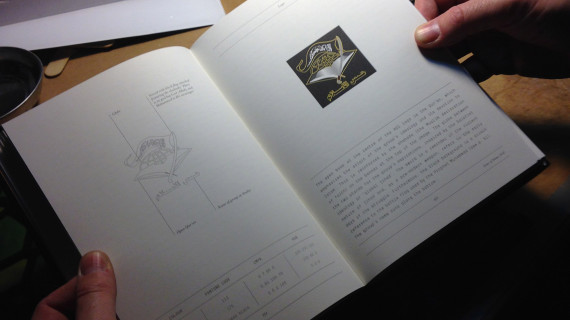 Now, add to this that he had just the coolest vibe around him! You could think that the guy designing art stuff for the #1 show in the world would be incredibly busy to want to chat with a Photoshop teacher.  The complete opposite.  You could see how enthusiastic he was about the work that he was doing.  He took a GREAT deal of time to show me around set, take me to places I didnt even think I should be in.  He was showing me places with the joy and energy that I was feeling about being in them and I felt like I was walking around like a schoolkid, my mind running wild with imagination!  Above, thats a book on terrorist logos, how they are broken down, pantone colors, symbolic meaning.  When they design something, they just don’t want it to look scary. They want to understand the genesis of the art choices in real life to create something with those impressions.  Just heady heady stuff. 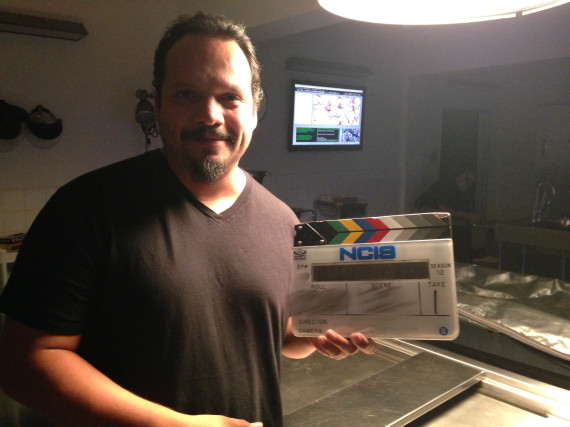 Of course while on set you kinda need to play the tourist.  Here I am in the Autopsy room playing with their clapper. 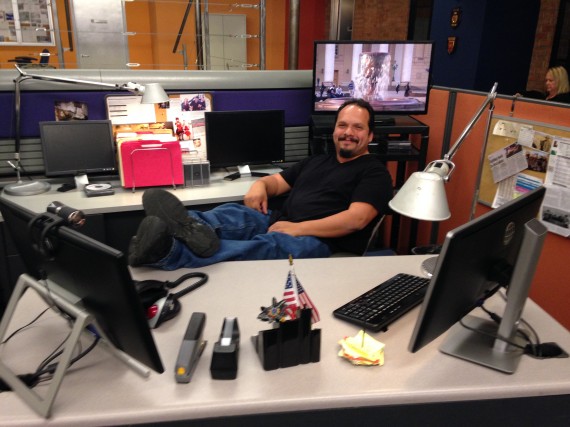 I got to kick the legs up in DiNozzo’s desk on the main NCIS office.  Apologies to Michael Weatherly.. I was incredibly embarassed to do this, but Kubeisy was indignant! (“you get up there and you put those legs on that desk!  That’s the shot!)

The set was buzzing with excitement and I got to stand in opposite rooms during some of the takes.  I got to quickly meet the cast at various spots- and truthfully… I felt kinda bad about it.  I mean, these guys are in the middle of a production.. I’m sure they’re all thinking of lines and intent and  stuff..   That stuff takes concentration… but they were cool about it despite that.  I quickly said hello and moved on.  The actors were totally cool.  Just hanging around.  Doing there thing.  Cast and Crew all ate together. You could feel that this group had such a big element of family and pride to it.  That was really cool to see.

Now, while that was neat… I have to tell you an even bigger highlight for me.  I was walking with Kubeisy, and he motions me over to the Executive Producer of the show, Mark Horowitz.  As he’s about to introduce me, Mark says “Oh,. hey.. I know you.. ive seen your stuff.”  I was like “um… excuse me?!?!?!” .  As it turns out, Mark is an accomplished photographer, and we got a little bit of a chance to chat about Lightroom, Photoshop, Cameras and gear.  That – I could talk about all day!!!  It was great to see someone of his caliber familiar with my work, and gracious of his time to chat about it.  That put a spring in my step for the rest of the day. 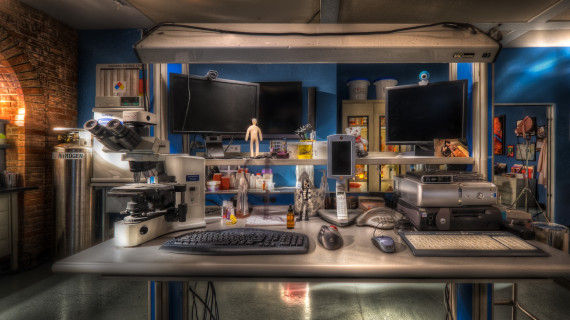 One of the places that resonated with me a lot was Abby’s lab.  Just an incredible amount of color.  Great little details.  I figured (with permission in the afternoon), I’d give the room a whirl with some HDR stuff – see what came out. 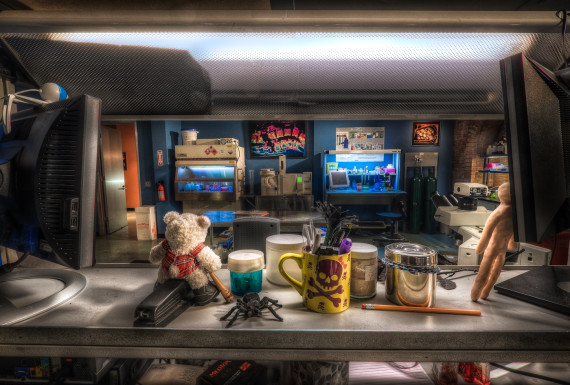 Considering the amount of time that I spent in there I think it came out pretty cool.  I’ve been really into HDR Portraiture as of yet, so I wanted to make some frames that (at least in my head) I saw the character Abby (Played by Pauley Perrette) in.  She has this great look on the show.. it would be neat to see in this style. 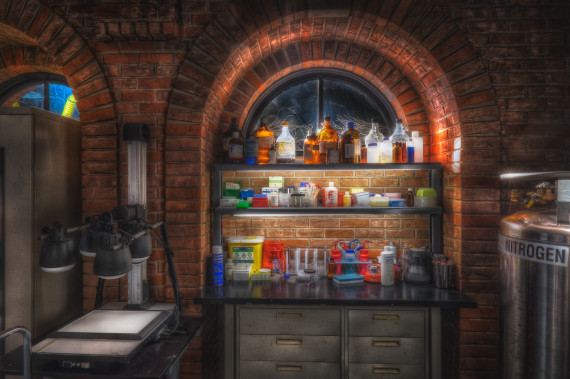 This was one of the corner areas inside of the lab.  The different color bottles and vials really stood out to me, so I figured i’d give them a whirl and see what it looked like.

Throughout the day I was posting shots to my Facebook account and people were like “Make sure you go to Abby’s room!  Don’t let her catch you there!!” 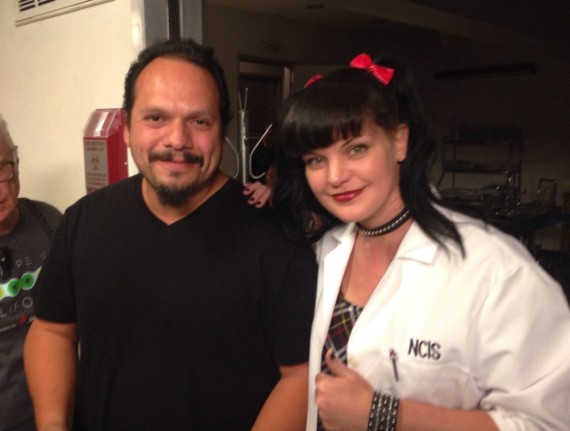 Don’t worry, soon as we were done with the images, Kubeisy took me over to the room where they were filming.  The crew (a lot of photographers there) were geeking out over the shot on the iPad (i went into a corner and just processed one of them on my laptop while I scene was shot).  Figured we had to show Pauley while we were there.  Thanks for taking the picture! Geek bucket list item completed. 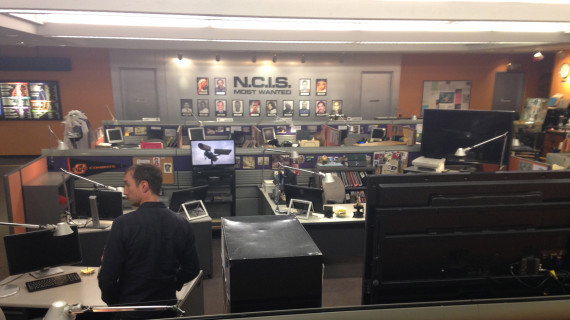 I wanted to send out a very grateful thank you to the cast and crew at NCIS for having me over yesterday.  The whole group – top to bottom- were so gracious of their time and energy and really made it for a blast to be on set!  An extra special thank you to Doug for sharing with me all of the behind the scenes stuff -( my mind is going 110 miles an hour still over it), Executive Producer Mark Horowitz for the camera talk.

Last but certainly not least..  to my friend Mike Kubeisy.  Thank you so much for re-igniting that kid spark I had.  For one day, I got to feel a fraction of what my pipe dream would have felt like.  My face hurt the entire drive back.