Im looking at this as part birthday present, part a weird kind of sword of Damocles.  But I finally decided to jump and do something with the thoughts in my head in making video by getting the C100 Mark II.

I absolutely love being a photographer and educator.  But for the last 12 years or so, I’ve found myself driving around in my car listening to music and making scenes up in my head.  Then I extrapolate pictures from those scenes and make pictures.  Ive grown to love that process, and it’s done very well by me (at least I hope it has.. I like my pictures for the most part. )

As i’ve made those pictures, i’ve always wondered about what I could do with the rest of the scene that gets stuck in my head.  When will that ever get out.

I remember in about 2008, Vincent Laforet – a Pulitzer Prize winning photographer came out with a a short video he did – entirely on the 5D Mark II called Reverie.  In over a week the video got over 2 million views. That video was the flag that was planted to signal the charge into the DSLR video revolution.  I sat with Vincent and talked about that video and the little time it took him to do it.  He did the whole thing with the Mark II and a single Profoto modeling light.

Fast forward a couple of years.  I was sitting with Vincent in a bar across from B&H in New York.  I sat at the bar with him while he showed me a video that he was about to release into the wild called Mobius. This was shot with the C300 – and the overall feeling of the short felt a lot like an episode of Lost or a scene from a movie.

Putting My Thoughts Out – Finally

All of this made me think back to the images I had stuck in my head.. the ideas I never got out.  The truth is, I never really talked to -anyone- about them.  This was a battle that I largely held in my own head.  On the outside – I was happy and pleasant about following one muse.  At night- I sat around thinking of a completely different one.

I finally told Vincent about all of the thoughts that I had about the scenes in my head – how I saw them, and how I really didn’t know what section to start at.  Do I want to go into grading? Technical editing? Beefing up my Premiere skills?   I didn’t even know what the thoughts in my head meant about work.

I remember he just smiled and said “You know what your problem is?  You are thinking like a Director.  You need to give yourself permission to do that – and start putting the ideas down.”

There are plenty of people that are involved in the production of video.  From Cinematographers to Special FX.  DPs to Directors – and the whole thing is a team sport.  Vincent gave me the idea to start dipping my toes in it with the tools I had.. but to make sure that the ideas that I wanted to get out were clearly visible to myself.  Once I had the ideas, I could clearly bring them to fruition.

Today Is The [Last] Day

That conversation stuck in my head for quite some time.. and I was thankful for it.  Now that Im forming Fotopromos a little clearer and we are focused on producing great content – the conversation has been in the forefront a lot more.  After some time, I finally feel like the me i’ve really wanted to be. 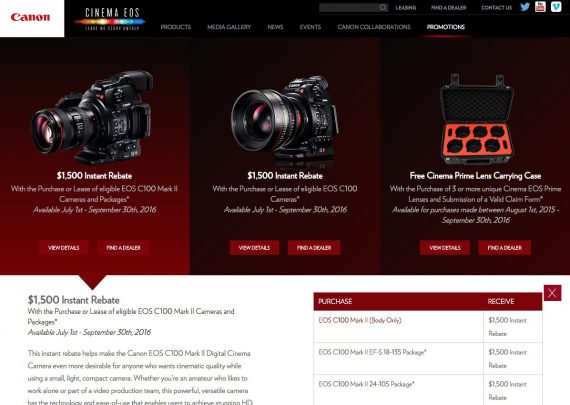 Canon has been running this promotion for 1500.00 off of some of their Cinema cameras. Today is the last day for it.

Last night I sat up and said “If I don’t do it, I’ll never do it. If I continue to be fearful of what the idea is going to look like if I don’t do it. I’ve rented the rig, i’ve borrowed the rig.  So get it, and put the weight of the rig under you to get out there and do something. If it doesn’t work – you never have to show it”

So.. I pulled the trigger.  Tired of letting fear run what I want to do in my head.  I think i’ll start a section on the blog and on the Fotopromos site dedicated to how much of what I know now has translated over to the video side of things.

I went and texted Vincent to tell him I had got the camera and that I was going to put those ideas in motion, like we talked about several years ago..  and his response was perfect.