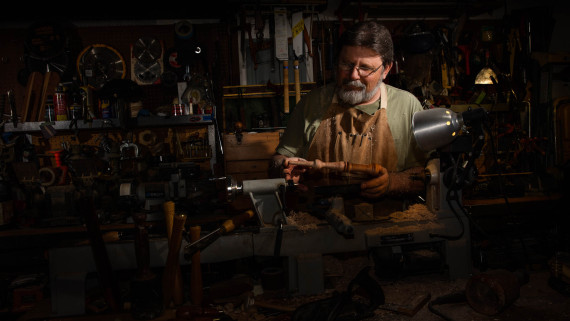 Back in January, I got together with my friend Kim Patti to talk over some photography stuff.  As we chatted, I learned that Kim was a retired Army/Navy guy that has spent al of this life doing woodworking – from a kid, to teaching it in school and to adults. Here I was, Face to face with a true master!

I relayed to Kim that I had been practicing Wing Chung Kung Fu for a while, and one of the things that I was dreaming about doing was building a Kung Fu wooden dummy (Mook Yan Jong) and that I had found a couple of videos on YouTube that showed how to make one cheaply using MDF.  He listened attentively and didn’t say anything about it and we parted ways.

A couple of days later, Kim came back to me and said “Do you know that in China, people would build the wooden dummy from an actual tree?” I did know that, but I never thought myself skilled to even build the simplest of dummies from plans on YouTube.  Truthfully, I am considerably inept at anything that has to do with doing stuff with my hands.  If I were to try to hang a picture on a wall – my neighbors house would be on fire.

Kim explained that there really is no reason I couldnt learn any of this stuff – and that there is no better feeling than sitting around and making something with your bare hands.  To finish a project on your own would give me an appreciation of the craft behind it.

He looked at me and said “Challenge accepted!  I am going to help you build one from scratch with your hands. ” The catch? It would be done step by step – with me coming to learn from him on both antique tools and modern tools.

(click on the images above for a slideshow of the process)

The next couple of months, I would drive an hour up to meet with him and spend time learning some of the components that were involved in the building of the wooden dummy.  I can’t really explain how gratifying the process of working with my hands was. I felt like this new hobby was stimulating other parts of the brain, and getting me excited about something new!

A few months later, I had finished the wooden dummy. With it parked in my room, I found something that I can get excited about!  I’ve spent time playing on youtube, learning about tools, trying some things in Sketchup and dreaming about the things that I could do next.

I have not been excited about something like this since I started photography- and it feels great.  Now, I incessantly bother Kim and my friend Al with tool recommendations  – a fie inside to try something new.

And I have Kim Patti to thank for all of it.  Let’s see what else I can make with my own two hands! Maybe this will give me ideas for new photography work!