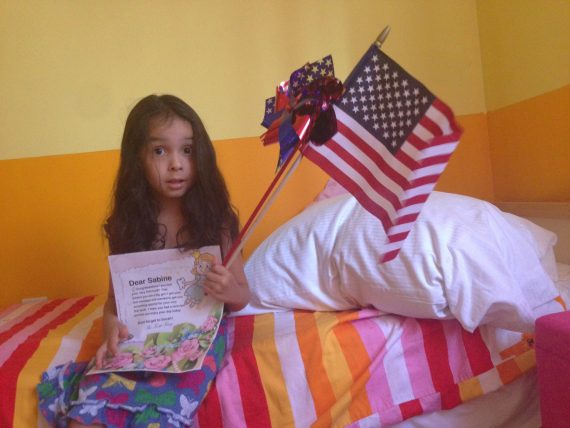 When Sabine was three, we talked to her about hiding her tooth so the tooth fairy would bring her money.  Sabine responded that instead of money, she wanted the tooth fairy to bring her an American flag.  Since then, Sabine has had a fascination over government and the presidency.  She has created videos using Obama and pretending that he was talking.  To her, this stuff was important – and seeing Hillary running for president was something that she really got behind.  As the election season drew closer, we had to sit down and talk to her about the fact that Hillary would not automatically become president.  We had to tell her that this was a choice, and that there were other people with different ideas running for president.  As we talked about what was being said during the election campaign, she was upset over what was being said, and what the other candidate was proposing. 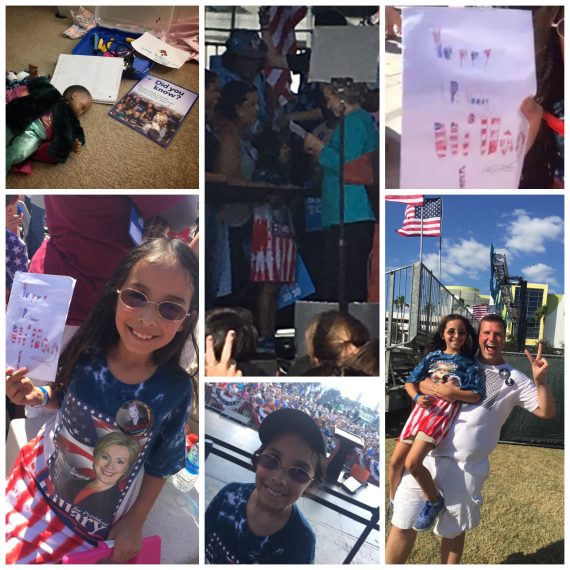 Sabine gathered information about Hillary Clinton, as was really excited to see her in the White House.  When Hillary stopped in at a rally in Florida on her birthday, my friend Latanya took her out of school (Jenn is a 5th grade teacher, working.. and I was away teaching in TN) so she could attend the rally.  You could not imagine the smile this kid had when she got a chance to set on stage and hear Hillary speak about what she wanted to do.  We try to instill in her that when you believe in something, you need to feel it – and also put it into action.

Talking to her about that – we asked her if she wanted to share her feelings about whats happening, and what things she admired about Hillary Clinton.  After sitting down and jotting down some ideas, we grabbed a camera and helped her put together a video to explain her views.  I think she took notice of some of the ways to speak about how she felt, and I think she did a great job at it.

I think its super important as parents that we ride on the coattails of the ideas our kids have.  When they express an interest, we should help them realize it.  And above all , we should help them understand that when you feel something – you need to take action on it.  Who knows? Maybe she’ll get a chance to go visit Hillary in the White House someday.  We’re incredibly proud of her.