Aside from the Flash and the Camera, the one thing that I think people should carry around in their car is a Diffuser. Take for example me hanging out with my wife and daughter out in Long Island this past Halloween. I wanted to get a cool picture of her in her overalls atop some pumpkins, but the only time we had was about 2:30PM- about the worst light there could be out there. 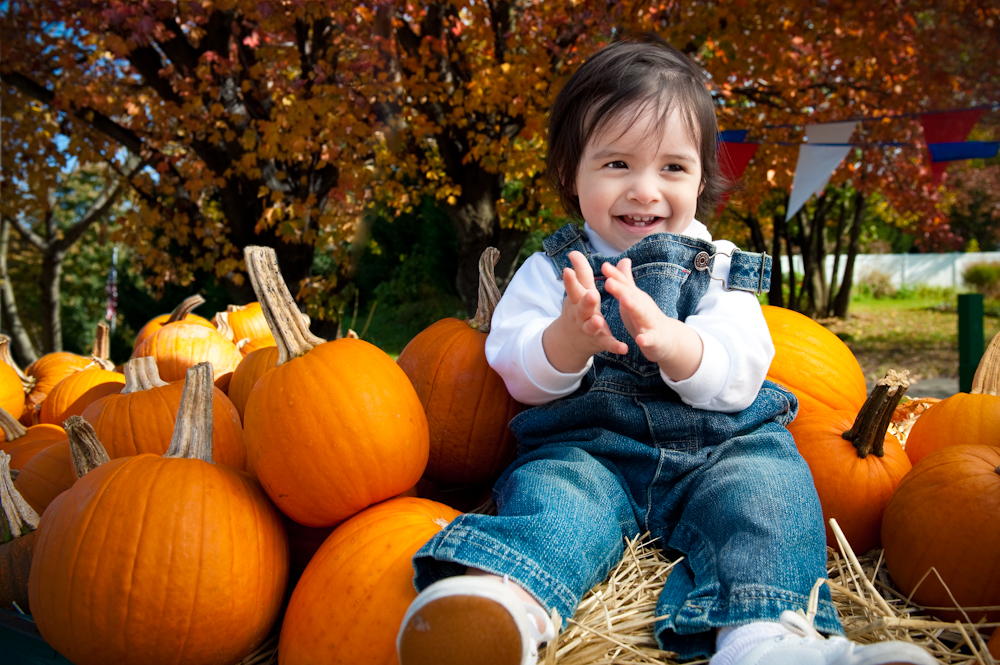 I don’t have the luxury of waking everyone up at 5:15am, getting them ready, and driving out to a patch to work with the ‘golden hour’ light – I mean, she’s one fer chrissakes! I have to make this work – and this scenario mirrors itself in a bunch of areas in photography. And all can be solved with a diffuser. Let me tell you how.

The rule is basically very simple here.  The smaller and farther away a light source is to you, the harsher the shadows are going to be in an image.  Now, the sun is very very large.. but to us, it appears as a very tiny spot in the sky.  It also is millions of miles away.  Small and far – guess what.. a harsh shadow when you try to use it.

Conversely, a large light source really really close to the subject makes the subject appear very smooth and minimizes those shadows.  Unfortunately we cant bring the sun down.  Well, even if we could.. obviously it would fry us to a crisp.  So, what do we do?

So try this:  Take a diffuser and just put it in between the sun and the subject!  The diffusing material can really be anything translucent.  Joe McNally has made it an art form to rip off sheets from hotels and take them to locations to use as diffusers.  Frosted shower curtains work great too.   For my taste, I like running around with a large collapsible diffuser (like the one pictured here) .  It folds up pretty small so you can stick it in your trunk.  When it comes time to use it.. just hand it to an assistant, and start shooting away!

So this is us running around chasing Sabine with the Diffuser

This is the location that we want her to sit in.

This is Sabine without the Diffuser.

This is a picture of Sabine with the Diffuser just in the camera Frame.

From here, all it took was a little re-framing of the shot, and a pull back on the Diffuser.  In no time flat, we were able to make a shot that was really soft.

It may seem awkward at first being the person running around with a diffuser at events.. but I will say this.  If you get any stares from anyone.  Proudly wave the diffuser about and make a shot with it.  When you do, show it to the people who don’t have one.

I’ll bet you they will be standing in line to use it, and ordering their own as soon as they get home.  It’s what separates a good photographer from a great one!