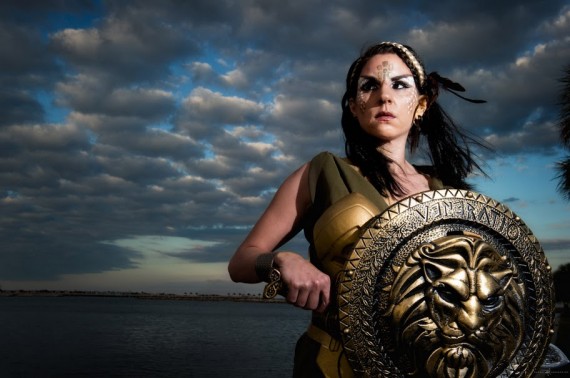 Here in Tampa My buddy +Kathy Porupski and I run a local meetup group. The group has swelled to about 500 members, and frequently we post a series of get togethers where people can come out and shoot.

Camille came dressed as a warrior for this year’s Halloween theme, and we had good fun running around trying to get some shots. It wasnt until the end of the night right before wrapping it up that we thought “ok.. that place we wanted to shoot was closed.. what if we try to stand you right here and make a shot”

Initially, I wanted to make a shot of her standing by those rocks you see way behind her, but it was fenced in. I wanted one of those frames where it looked like she was waiting for a ship coming in.. but wasnt working. So.. I placed her right next to the pier we were at. Shooting manual, I reallyreally underexposed the sky that was behind her. Once that was done, I placed a light camera right and just popped some light on her. The costume that she was wearing looked very costume-y, so I tried using the small light to really punch up the contrast (detail) in the shield instead of hitting it with a softbox and making it look all soft.

I wasn’t really going out to make an epic shot, but if I could just go out and flex the photographic muscles a little bit.. its not wasted time. Keep exercising..