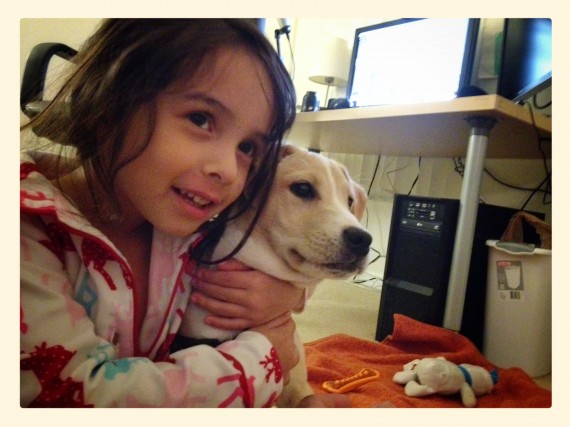 Today was a wild mix of emotions.  After much soul searching and thinking,+Jenn Concepcion and I decided that it would be best to give both Sabine and Evie a chance at having the best possible chances out there – and that Evie being here wouldnt really do it because of what appears to be a constant allergy on this.  Jenn and I had stomach turning times on this as we didnt want to feel like we were putting the puppy “Back in The System” – so to speak.  I mean, she was well on her way on being housetrained (only 2 accidents), and in 10 days knew three commands.

Our Hero today, without question is +William Beem and he deserves much thanks.  With a big heart, and a big love for dogs, William jumped at the chance to give Evie a new home with his family of pets.  She has a big fenced in yard to roam and play, and friends to keep her company.  And no worries of dumb owners and possible sneeze attacks.

The day after we got Evie, I started getting this suspicion that things were not right – I cant really explain it.  I just knew things were off.  Because of that, I started changing the references that we were making about Evie being in our family to “hey Sabine, are you enjoying Evie’s visit?  Hey.. how do you think her visit is coming?”  I wanted her to stay, but I was fearing the worst.  I figured.. id rather be the hero dad that extended her visit indefinitely than the one that cut the ownership short.  Because of that, +William Beem  was just coming by the house to pick up Evie, after her visit.. and Sabine appears to be cool with it.

Jenn and I on the other hand?  Kinda not.  I am ever grateful that Jenn’s friends Molly and Michelle and their kids were here..  I expected this to hurt.. just not as much as it did to either of us.

The great part about it was that Evie was a ball of wagging tails to William, licking his face so completely, and excited to be hanging with him.  As he stood and we told him about what she likes.. and how we talk to her after poops, Evie just sat by his feet.

She is such a great dog.  And from what I hear from William – getting along just fine in his home.

But i’d be lying if I didnt say that this blows ..    We’ll totally look for another pet ..  but for right now, i’m just going to go take a walk with no leash, and be happy heroes like William are out there.

I know she’s going to love her new home.