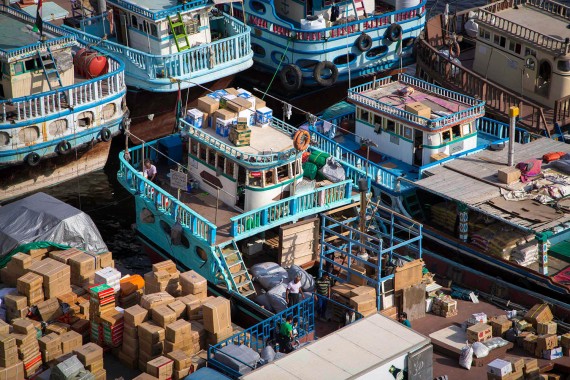 One of the things that you may not know about me is that I had been chomping at the bit to come over to the middle east. Ever since I was a kid, I have always wondered what it would be like. Ive always been fascinated to learn arabic, and have thought it would just be the coolest thing to wander around Iraq, Iran, Bahrain, Istanbul. Ive had dreams to walk across the Bosphorus, and in college my screen name was Xerxes. Naiveté..

To be out in Dubai has been a really interesting adventure. While being in the middle of the UAE – the place has an amazing amount of modern touches. From Subway to Krispy Kreme- every sort of business, on pretty much anything can be found here. I walked in a mall that was made to look like an old Souk – and found a Cinnabon.

I wanted to get out and check out an area that had a little bit more Patina. To do that, you have to travel up Sheik Zayed Road to Deira. Deira was considered the commerce center of Dubai till the expansion – preserved greatly by the great amount of Dhows seen working on trade. Items of every type and size are loaded – hundreds at a time – into these old ships and transported along the Dubai Creek. 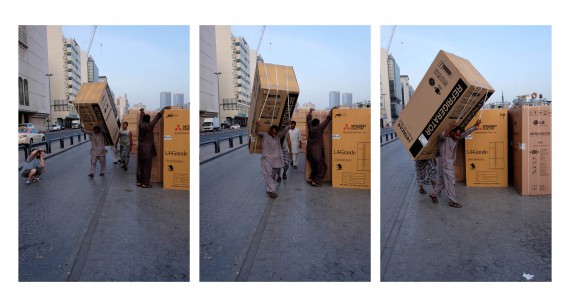 One of the things that I found incredibly amazing is that these guys were loading refrigerators.  Whole, complete, take-3-people to put in your house on a normal day, refrigerators – single handedly.  One person at a time would carry this ginormous refrigerator on their back onto the dhow. Three people would hoist it up.. but one guy would make the walk – only gripping that plastic square cord that comes with the refrigerator box. I thought this feat of strength was amazing.  I thought that it was even more amazing that I was standing in a land that was able to create forests in deserts and build the tallest building in the world – these guys used their own sheer strength to get the job done. 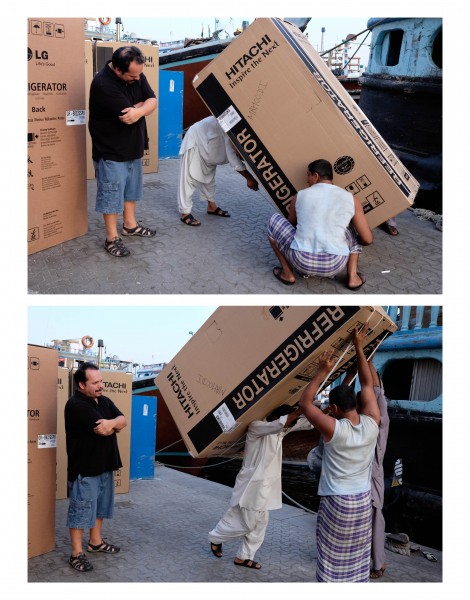 Ill be the first to admit to you – I think I am absolutely horrible at street photography.  Its not that I dont feel comfortable with a camera in a fast environment – I do.  It’s not that I am unconfortable approaching strangers. That is the absolute least of my problems – I’ll dive into any strange situation with strangers… I love that stuff.

I just believe that when you are around the world taking pictures of another culture – It feels like just that.  *Taking* the picture.  I feel like in some street photography, you are a witness to the world around you, and that’s cool.  I also believe that there are times that a picture is not for you to *take*.  This doesnt mean that its wrong, and that you shouldnt make a shot.  I just felt like in order for me to have a picture, I needed to have an exchange.  If I was ok with taking a picture of these guys busting their ass, I needed to give at least a little bit of flesh.  I needed to have *some* kind of exchange here.

I guarantee you that any notion of bravado was immediately lost the moment that I grabbed those plastic shipping cords on the box.  Wrapping that around my hands I thought to myself “Ow.  You know these things could leave a mark” – Completely ignoring the fact that I was about to haul up several hundred pounds of refrigerator on a back that gives out so easily you’d think it was made of straw. Those three top pictures hurt – quite a bit.  The last three pictures show me trying to carefully put the frigging thing down and not get one of their precious units into the scratch and dent section of their store before it even left Dubai. 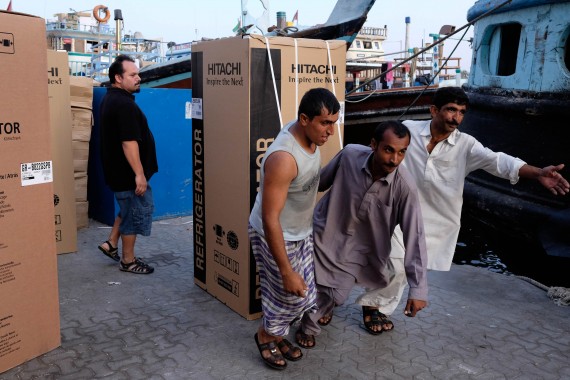 I hated the fact that I couldnt do it.  I hated even more that the dude in the middle did like three of them while i tried stretching my back in a corner, wondering “What the hell happened to me… I need to add “Moving Large Kitchen Appliances” to the workout regimen when I get home.”

OK.  So *here* is where Bravado *does* kick in.  While I felt like I had given them my pound of flesh in exchange, I wasnt going to be remembered as the guy who *didnt* do their job. 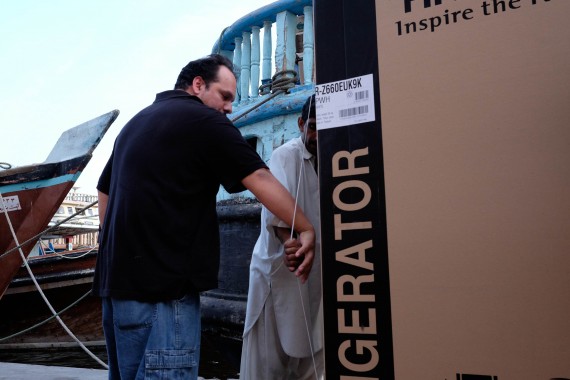 So help me God, I’ll move this frigging refrigerator even if my back breaks in the process.

It did not look pretty.  And it certainly felt like my back was shot to hell during this part. But, I got it up.  I got it on my back, 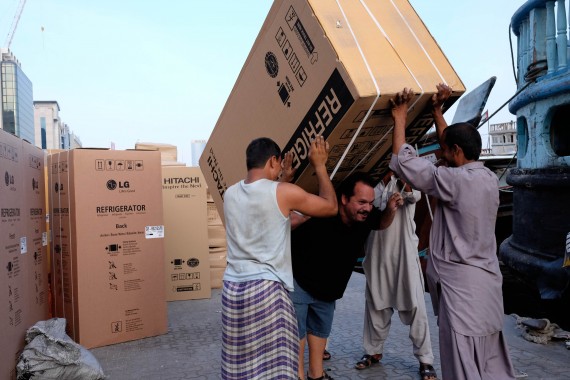 And I got moving.  That said, after the first one almost crashing down, the guys werent going to let me do a victory walk with this one without a little monitoring. 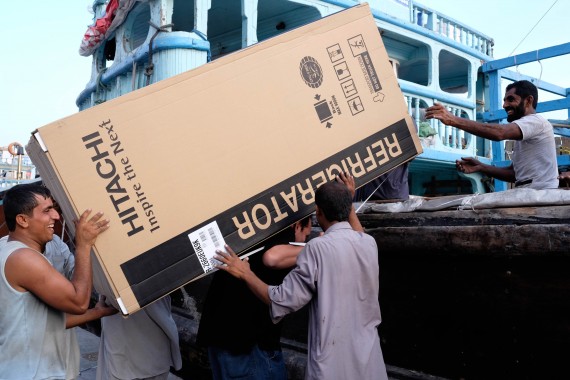 As I write this in my office chair in Tampa, my back threw a little bit of a spasm just looking at the shot.  But damnit, I got it onto the Dhow, and the guys laughed through the whole thing. 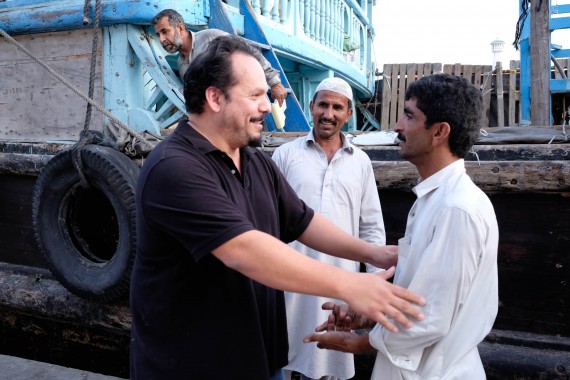 I dont really care whether they were laughing at the idiot who thought he could do it, my sheer stupidity, or tenacity, I had a bit of a moment with them.  To me that was worth more than a picture. It also gave me an incredible amount of appreciation for how hard these men are working on the docks.  Simply amazing. 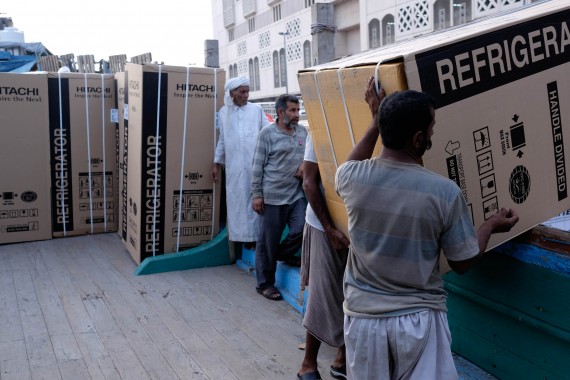 I was even happier of the fact that the Captain was cool enough to welcome us aboard on the ship!  I immediately made sure that they knew that I was down to stay on the ship as long as needed.  That was until I asked where they were going.

Apparently they were headed to Iran – 15 hours away.  To me, that would have been an amazing experience.  That said, I think getting in and out would have been a little cumbersome… and I had a class to teach the next day.