Sitting on a flight from a quick trip up to NY after being out in Vegas and Dubai for the last couple of weeks. Man, does the jet lag kill right about now…

I want to catch up with you guys on stuff that I’ve been working on as of late. Could not have been happier to the folks at Gulf Photo Plus Dubai for having me out there for the week. Got to make some friends, speak for Western Digital (hey guys! Nerd achievement unlocked!) , and re-connect with some really close friends from another time in my life. It goes without saying that when you’re at GPP – you are working. Hard. But when you see the kind of passion that comes from the folks who attend that – you just want to keep giving. Great energy.

I had just a couple of days off to go make some pictures. The last time that I was in Dubai I only got a couple of minutes to shoot the iconic Burj Khalifa on my way to the airport. This time around I wasn’t going to make that mistake.

This time, I scoured the Internet. I flew in and out of Google Earth. I checked buildings and locations for a cool vantage point. I emailed people, tweeted others, and tried to come up with a multiple prong approach to get a shot that I would be happy with. There are no shortages of people doing cityscapes of Dubai – and some people doing them incredibly well (Check out Daniel Cheong). I just wanted to come here, scout the location, and do something that I felt had my fingerprint on it. 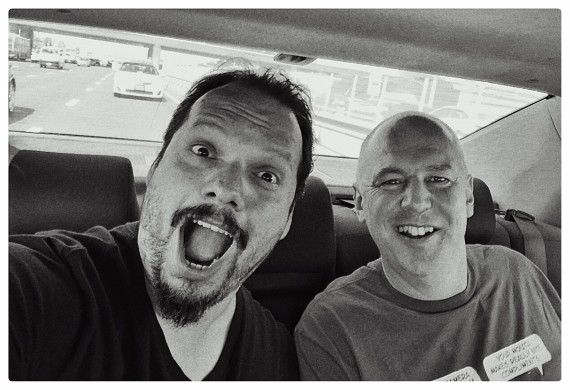 Packed with several options, I headed out w my friend Martin to the Burj area. A tech problem on my end shut down one option.. but I had other plans.

I was shooting with a couple of cameras this time around, so I needed a couple of mounting options. Out came out the Platypod Pro (which, the more I use, the more I dig), and the Manfrotto Pixi. For the main camera shot, I had my travel tripod w me – Really Right Stuff TQC14 w 30 head. On this, setup the 5D Mark III with a lens I borrowed from Tamron at WPPI : The 15-30 2.8.

I’ve got to say- I really enjoyed using it! Without giving it the whole pixel peep- thought it was sharp – focused pretty good for me, and gave me great results. Single image shots looked great. That said – I was looking for a specific feel for this image – a super pano.

The weather gods have been with me this trip. Last couple of days before this outing Dubai had some gnarly sandstorms and visibility was just awful. Of course – I get here and feared that. 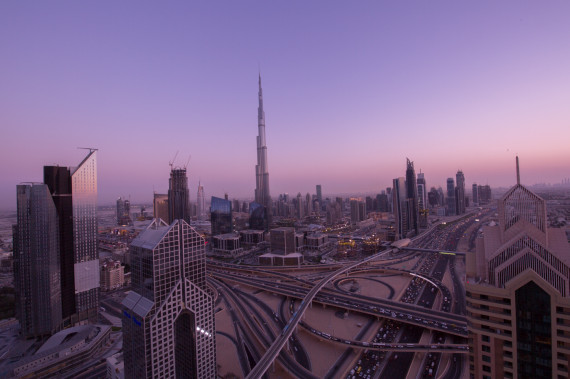 Right before sunset, you could see the storm really pushing out and showing you a bit of color in the sky. As the sun dipped further, you started to see this really cool turn, and I just smiled so wide from the inside. The colors were just so cool…

Martin and I just stood there feeling like we had a private seat to the most amazing show, the Khalifa watching over it all..
It was one of those moments-to-remember – kind of feelings you have in your gut. All I can hear is Hans Zimmer’s “The End” from The Dark Knight Rises soundtrack in my head as I’m holding the camera.

I swing the camera over to the east and I capture a bracket – just in case. Swinging it to the west, I grab the second series.

You ever get that feeling when you click the camera where you just ‘feel’ that its in there. Where you just ‘know’ you have a neat moment possibly bottled in this box of buttons and glass. That was me. I could not WAIT to get off the ledge to see it.

Out of pure habit – I decide to run the shots as an HDR – just to see what it would give me. True confession: Almost threw up in my mouth when I did that. It just didn’t convey what I felt. And it looked like junk.

That said – I knew which of the series I really felt like it was ‘it’. About ½ EV down from the meter. Took those two shots from the series and merged them together.

I was just beaming over it all…

Im going to run a test print of it tomorrow – about three feet high!

I want to remember that moment for a long time. The print will do that.