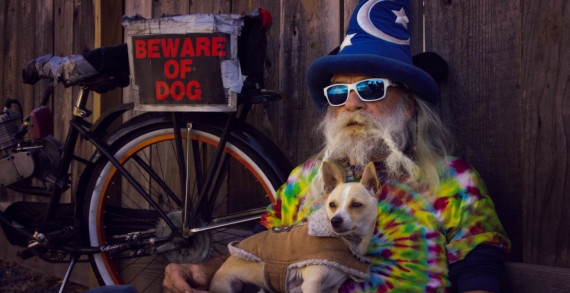 (part of a series of events that happened on my birthday- October 4, 1974.  Just a cool example of what happens when you open yourself up to things…)

As we drove out from Yosemite to San Franscisco, we passed a man on a bike wearing a tie dye shirt and a wizard hat – carrying a dog in Oakdale.  As I motioned to Pete, he knew immediately that we would be turning around to try to make a shot .

As we pull the U-turn, we see that the wizard has disappeared.  We pull into a parking lot for a trailer park, and Pete goes in to find out if the was there.

As it turns out, he lived in the trailer park across the street.

The Great Wizard was nice, gave us audience, and allowed us to make a picture of him. A proud cancer survivor at 77, he pointed to his urine bag attached to his hip as a badge of honor. 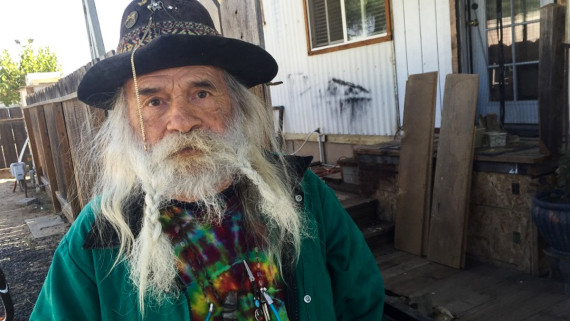 He was a great chat – but it gave me that little nervous tickle in the hockles that he had this ever so slight resemblance to Charles Manson without his glasses on.

It didn’t help that he was trying to find his way out to the Haight.

…or  that when I told him that it was my birthday in 1974 – he would say “Oh, i think i was getting out of another prison in 74.  Hey.. want to see the bracelet i got from a killer in San Quentin?”

We paid The Great Wizard for our time with him, he showed us a couple of his spells and salutes, shared with us a walking cane he made in prison, and we were on our merry way blessed to be under his magical protection.