A couple of months ago, I met my friend Kim Patti and spoke about photography stuff.  While we were sitting around talking about photography, he relayed to me how much work he does with wood.  Dont know why but I had spent the several months previous wondering about a bunch of wood projects (this despite the fact that I am absolutely horrendous at doing anything with my hands).

I spoke to him about my desire to make a Kung Fu wooden dummy to practice on at home.  I found tons of youtube videos out there on how to build one using MDF – but even so, those things seemed amazingly complex. A couple of weeks later, Kim shocked me by calling and saying “Challenge Accepted!  Im going to start building one of these from scratch.  But we are going to build one the way you -should- build it .  From an actual wood trunk!” 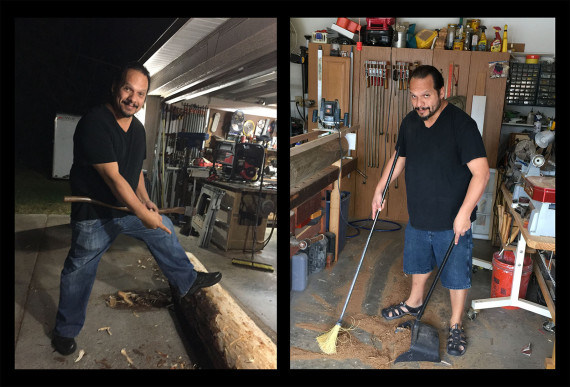 The process started for me using an Adze that was made in the 1700s to remove the bark of one of the trees. I got to do that – and got to do some of the cleanup at the workshop.  I feel like an actual apprentice!! 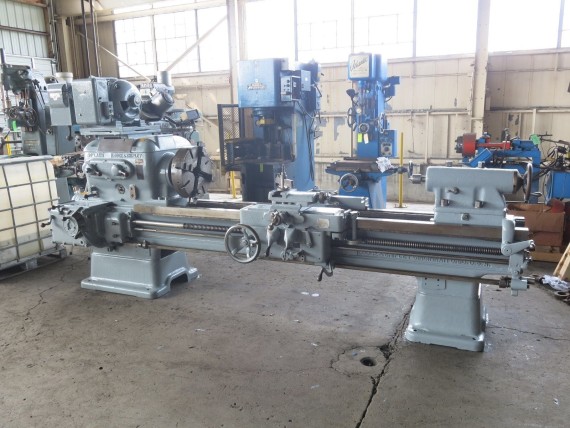 Once you have gotten rid of all of the bark,  you have to reduce the log to the size that it needs to be by getting rid of the excess wood and making it smooth and round.  To do this, you have to spin the log and cut off all of the excess using a Lathe.  Want to get one that is 6 feet so that you can make this job easy?  Yeah, thats about 20 thousond dollars.  Or you can get this one for 6 grand and give up your garage. 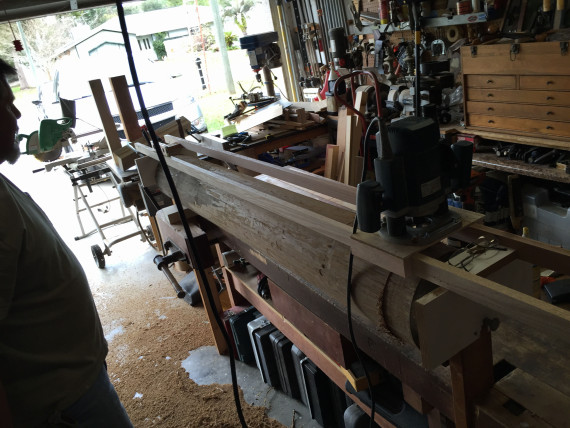 So what does he do when he needs to turn this giant log?! Instead of using a large Lathe, Kim actually built one from wooden parts right on his table!!  The amount of skill this man has is contstantly amazing me.  Now – I’m supposed to be helping here on this project – so my job is to physically turn the log while he runs the router down the trunk of the tree. No motor.. just hands.  But pretty ingenious when you come to think of the fact that he built the track for it, built the adapter for the jig, and built the table to do it on.  All out of wood.  Watching someone like this work has been incredibly humbling..

I also dont think i can really explain how zen the entire process has been feeling.  I wish I had more skill in this kind of stuff.  With everything going on, all I want to do is run up to his garage and hide in there, working on this dummy, a table, some bookcases.  Kim explained to me about a certain kind of pride that you have when you make something with your bare hands.  As a photographer i can totally see what he means there. I am excited to see how it comes, and I love the fact that – clumsy as I am – im actually putting something together with my own two hands.  This thanks to another teacher that has come across my path – at the exact moment that I need to.

Nothing is coincidental here.  Kim is another creative totem for me. I’ll talk about all of these in a bit. 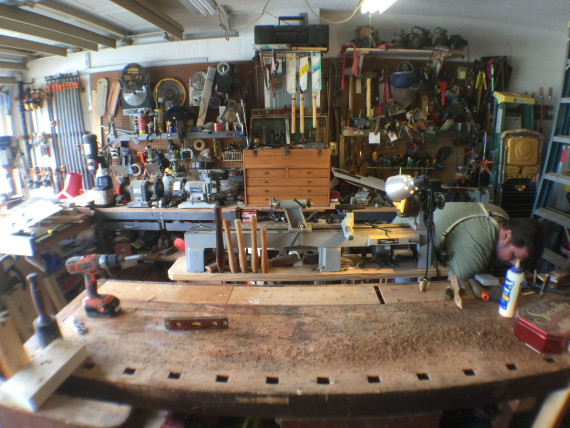 To stare into Kim’s woodshop is to stare into something downright amazing.  The level of detail here is too cool!  The ambiance just screams that this man is a master.  The moment I walked into the garage, all I could see is a cool portrait of Kim in the middle of all of the tools that he uses to make his masterpieces.

I wanted to give the portrait a intimate feel, and only highlight portions of the shop.  I also wanted to make sure I got as much detail as possible in the picture – I intend to print this puppy BIG!  To do that I used the Canon 5DS with a 24-70 lens.  I brought the ISO down to around 100, and shot at F11. 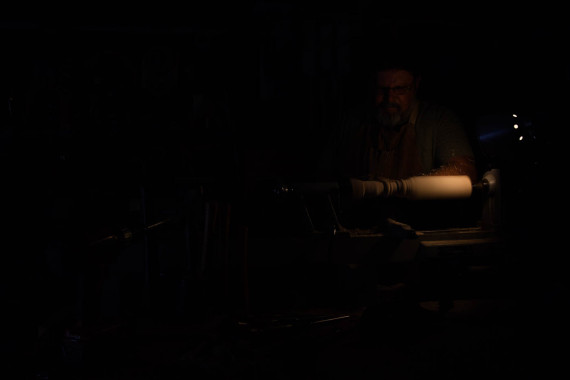 Starting at 1/160 I started dragging until I saw just a hint of the environment.  I knew that the lamp was going to be in the shot, but with all of the lights in the shot and the shutter where it was, I would not be able to light his face and make it look consistent with the lamp in the frame.   I’d need to fix that. 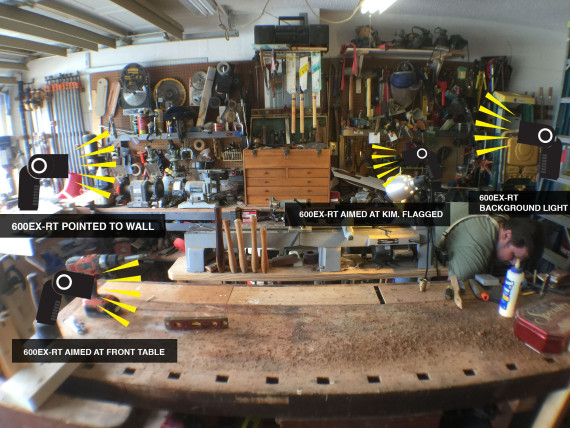 In the setup here, we have 4 Canon 600EX-RT’s setup.  Two for the background elements to the left and right and one for the elments at the front of the table.  From there, we set up another 600EX-RT high camera right, with just enough light to light him and give the intention that he’s lit from the lamp (My attempt to tip the hat to Heisler by motivating the practical).  A flag at the bottom of that flash would prevent a lot of spill onto the silver part of the flash.

Couple of pops later, we got the shot. 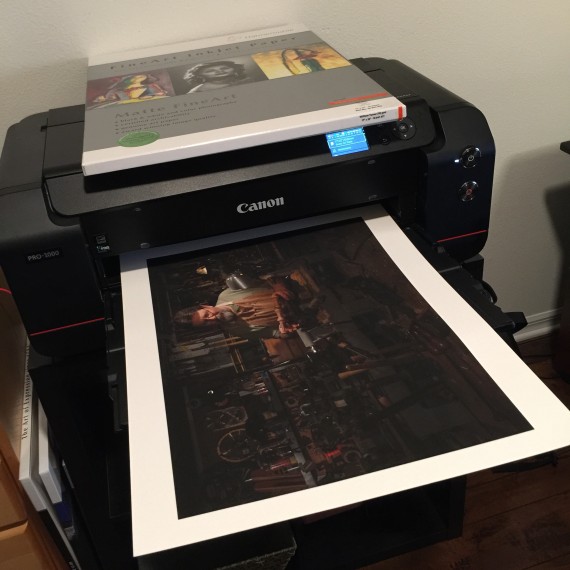 When I saw the picture, it had a little bit of an old world Geppetto feel to it.  I wanted it to have that rough old world artistic feel to it, but wanted to keep all of that detail.

I have been having a lot of fun with the Canon Pro-1000 printer recently – so off to the printer it went. I paired the print with the Hahnemuhle William Turner 310gsm Paper  (Amazon link: Can get it here).

Drove up there and handed it to Kim – ever thankful to run into yet another master along my creative way. 🙂