My mom and dad met on the streets of the South Bronx in the seventies, and raised us as best they could in the middle of the crack epidemic. My dad worked as a building janitor and my mom stayed home raising us kids. Neither of them ever went to school – but did the best they could to give us a chance at making something better for ourselves. Something they never really had a chance for themselves. 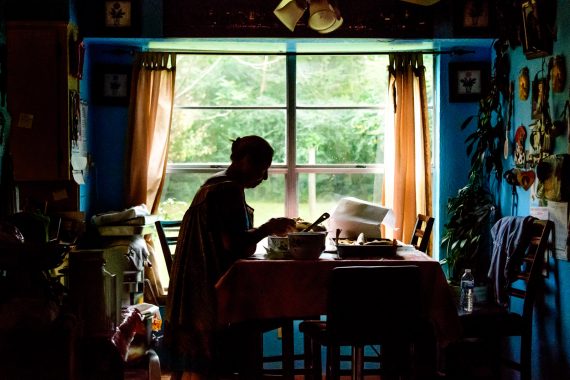 To get away from it all my mom and dad decided to move to Cantonment, FL to be closer to a couple of my brothers. Dad went first as my mom had setup a bunch of surgeries for her eyes and didn’t want to mess up the appointments when she was so close to getting her eyes fixed.  My father unfortunately died walking on a road on my birthday in 1998. They never got a chance to live together in the house in Florida.

My mother was left to move into the house in Florida in her own. She had no education. No job. After a strange illness almost took her. She was left to wander the house alone not really knowing what she would do with her life. I would get calls from my mother- frantic- convinced through her panicked tears that she was seeing my fathers ghost everywhere.

Me? I was half living in a Uhaul storage unit and spending the other half of the time on a twin bed in my friends mothers house – the result of one of the big layoffs that came with the dot com bust (that… is another story for another time…) I would take my mothers calls helplessly – struggling to find a way to try to help when I myself had 0 job prospects and living my own personal hell.

There was one thing I did know. While her brain was right in seeing ghosts, what she really was suffering from was a Raison d’être– a reason for being. She had nothing – and we all need something to put some wind in our sails. A reason to put the shoes on in the morning.

I packed as much as I could in my old four door black Chevy Corsica and made the trip from New York down to Pensacola Florida.

I didn’t have a plan past this. I figured I would just come here and try to figure out why I was compelled to come. I needed to help her dig through who she was and find something she could use as a foothold to climb past this rock of despair that was slowly crushing her.

My mom and I talked for weeks while I interviewed her about her life. Several weeks into it I asked her to remember anything of her childhood that she did. Anything that could give us a clue as to where to begin an adventure. My mom told me of times when she was a kid in Mexico. She would go out and sell tamales to people on the steeet to help feed her brothers and sisters.

We found the foothold.

I told my mom “we will begin with this …” 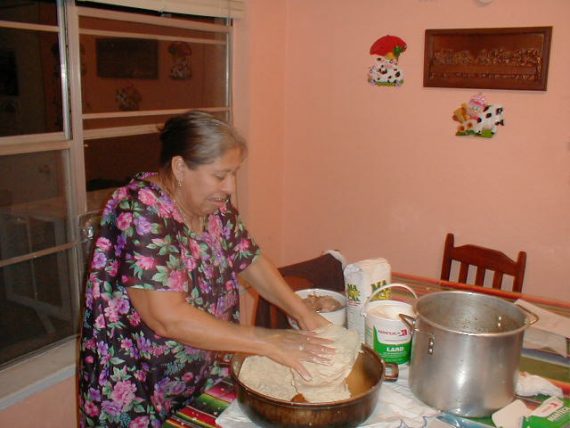 Over the next couple of weeks we would scour the web for recipes on tamales. Once we had a good handle on what we were going to do we packed the car and headed to North Carolina to visit a second cousin of hers that sold Mexican supplies. He would sell us the first supplies that we would use to make tamales. 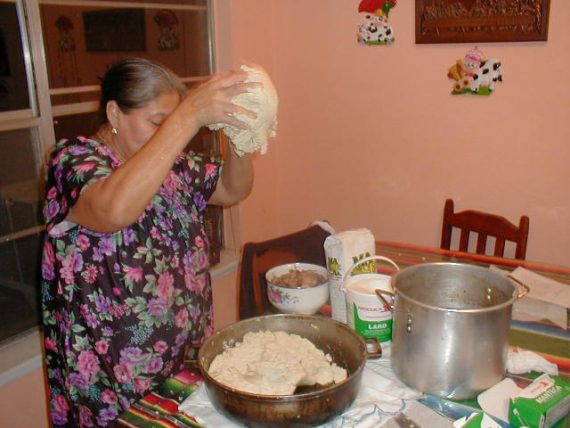 Coming back to Pensacola we’d spend the next several weeks trying out recipes to figure out how to get the masa (the corn, broth, and lard mixture) in the right proportions to make a good tamale. The masa needed to be mixed in the right proportions and the masa needed to be mixed and aerated. This meant taking the masa and throwing it down on the table repeatedly. 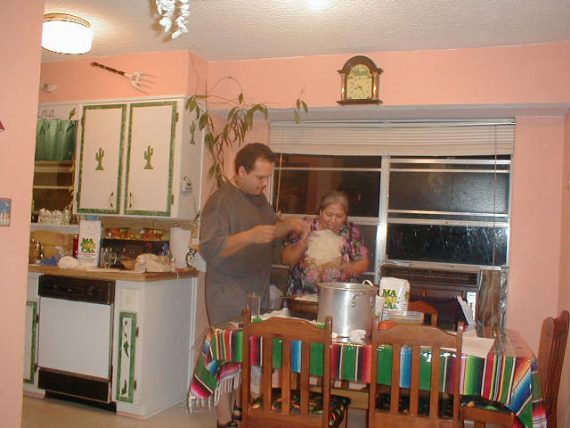 Tamales are an extremely time consuming thing to make and even more so when you didn’t have a mixer. We found that a great test of the masa consistency would be if a ball of masa would float in a cup of water. 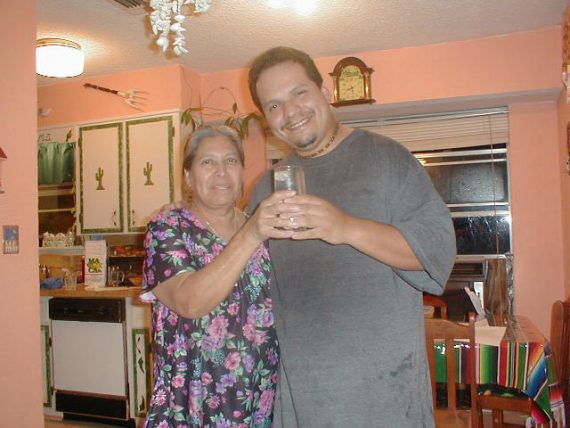 After several weeks of trying – we got it where we needed it. Success!

Bring Them To The Back

We worked on making a couple of tamales and packed them in the car after their three hour steam. I drove her to a Mexican restaurant in town and pulled into the back of the restaurant. Here i told her my plan.

“Forget about trying to sell the tamales to the restaurant. Sell them to the dishwashers. If they like them enough to buy them they will take them to the front of the house. “ she didn’t want to go into the kitchen out of embarrassment but I told her “you need to go in there and sell these. Now,”

She went in and sold some. We moved to another restaurant and did the same thing. We did this for a couple of days. Couple of weeks later we got a call from one of the managers of the restaurant wanting to meet with her and to try one of the tamales. We packed the car and went to meet them. My mom walked out of the restaurant with her first order. 50 tamales.

We got a start.

Over the next couple of weeks she would get other calls from managers asking for her tamales and we got to the work of making them. My mom – never really understanding accounting took to putting money in shall cups. One cup was the masa money. Another was the meat money. Another- the sauce money. She would take from the cups to but the materials and replace the money with what she got. In a final cup she put what was left over. Her profit.

A few weeks after that I would look over my shoulder during a break from looking for a job and see my mother replenishing her cups and putting a wad of bills into the profit in the final cup.

There it was.  She found her Raison d’être. I cried at the computer knowing that she now had something that could give her the wind for her sails.

36 hours later – I would receive a call from a manager of a tech school asking if I could be ready in 4 days to give a class on using Adobe Pagemill in New York.

I remember my mom taking some of the money from the profit cup and giving it to me to get the gas I needed to drive back up to New York. I packed my car, hugged her goodbye, and cried my way up the long trip back north. I was sad to leave her but so proud that she was able to make something on her own. That path to that school would lead me to become a Photoshop Guy, speak to thousands of people, write books, and offer me a chance to try to follow my own passion to teach.

Coming Back To Pensacola 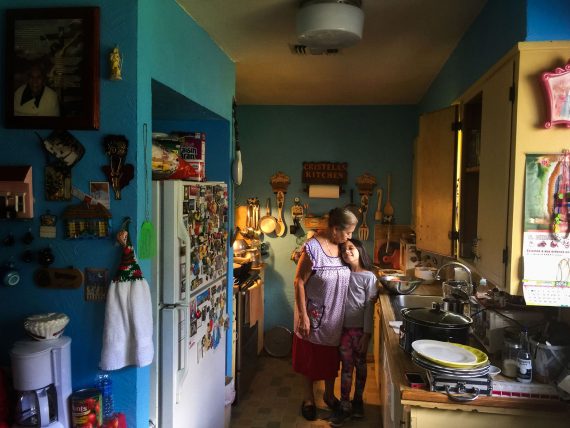 Coming back to visit her now, there is not a restaurant in town that doesn’t know her. She has a whole network of friends, managers, dishwashers, and people looking for her for some tamales or a conversation. She still gets up every morning And goes over who she needs to see for the day. And she still makes tamales.

When I come over to visit , I smile as she works through the masa on a mixer and we constantly rub each other as to who is the student and who is the teacher.

On this trip, Sabine asked me in the car if she thought Abuela would be able to teach her how to make tamales. My mother is definitely someone to aspire to.

As for me? I’m back in the hunt, looking for that Raison d’être…

I’m flying with almost no net. On a good day- it’s only completely terrifying as I feel like I’m back in that black car looking for a clue.

But. It’s a reason to be. Everything else will just fall into its own cups. In times of great fear – I just have to look at my mom.