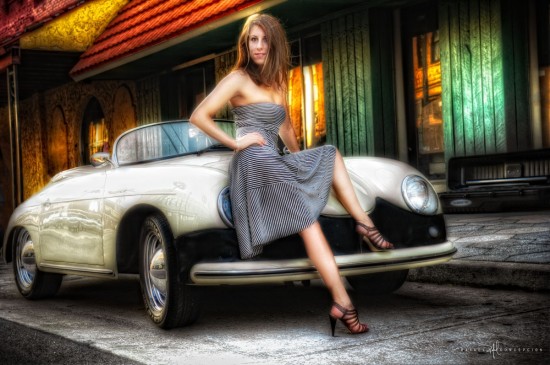 About a year and change ago, I started a meetup group called the Tampa Bay Strobist. The idea was to just get together with like minded peeps and go out and just play with lights in a relaxed environment. I figured – if we got 20 people to go out and try some shooting with, hey.. be great.

Fast forward a year and the group’s swelled to over 340. My buddy Kathy Porupski runs the group (some local photogs freaked about me having a group and cutting into their ‘business’ – I didn’t even know Meetup was a business) . One of the things she does is every month, she has a Shoot Out. Bunch of Photographers get out there and bring their gear and practice on willing models for a few hours, then get back together at a pizza place and chimp.

As everyone is scrambling about to get their speedlights ready (they were like 50 people.. 6-8 groups in different locations), I wondered to myself. “It’s 7PM. Sun’s not going to go down for another hour.. maybe more. Why shoot with Flash at all?”

As everyone dilligently worked their units to the ready, I saw my buddy Stephanie posing for some people by a car someone brought. People shot from the sidewalk of the car, which clipped both the wheels and Stephanies feet. Not only that, it was shooting into a series of cars across the street – each of them newer and less interesting than this one. The shops on that side of the street were covered with paper on the windows as they are all closed.

Instead of shooting against that, I went to the street and talked to the photographers there about changing their angle. I postulated, if they shot from -this- vantage point they may be able to get some of the wall colors, and make it a little “old Havana” ish (I mean, it’s Ybor, right?). Hey.. with so much sun out, you could even try for a little HDR and mix in some portraiture.

Truth be told, I didnt know if that part was going to work. That generally doesnt stop me – and totally shouldn’t stop you. If you’re out there, and you’re shooting brackets (which I think you should be), you owe it to yourself to blend techniques together. Normally everyone poo poos HDR in people, but I have to say it’s growing on me. A lot.

Keep open minded.. Only go for the gear that you -need- for a shoot. If it doesn’t call for a light, don’t use one. Experiment. Those are the meditations i’d love to leave you with for the weekend.

Thanks for stopping in guys, I really do appreciate it.