Sitting on a flight from a quick trip up to NY after being out in Vegas and Dubai for the last couple of weeks.…
Read More
0 7,047 Views 0
During my day off at the Gulf Photo Plus Workshops - I was lucky enough to get out to the  Sheikh Zayed Grand…
Read More
0 2,962 Views 0
Getting ready to head out in the AM for the Photo Pro Expo for a couple of days this weekend and am getting some…
Read More
0 2,436 Views 0 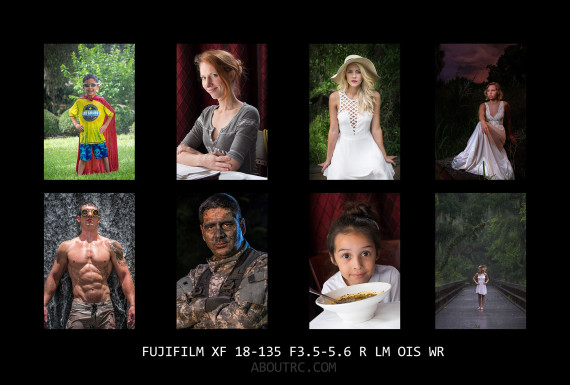 Over the last couple of months I have been playing around a lot with the Fuji XT1 camera that I got when I was out in Dubai.  I have been on a campaign to tell everyone about how well that this camera has been performing.  It’s been a completely different experience for me – finally a small portable camera that has a great featureset and amazing image quality.

Not too long ago, the folks over at Fuji asked if I would be interested in taking their new 18-135 Weather Resistant lens out for a spin and see what kind of images I would get of it.  I jumped at the opportunity.  I figured after some playing around i would share my findings – grouped in projects from “Oh, that’s nice – a little sprinkle” to “Man, you shouldn’t even be out there in that weather.” I wont focus too much on the technical particulars out there – I’ll just give my anecdotal experiences and share the images I did so that you may be the judge of it.

Tale Of The Tape 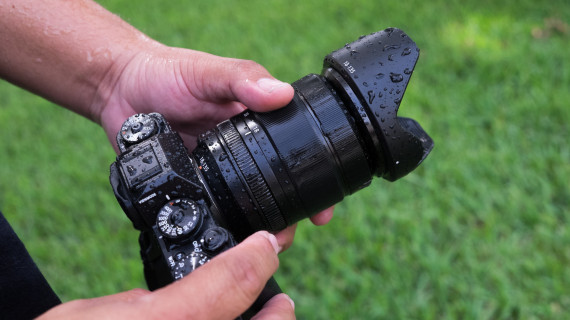 The Fuji XT1 is a Weather Resistant camera, with over 80 points of weather sealing in it.  Because of this, the camera is dust resistant, water resistant, and freezeproof to about -10 degrees Celsius.  This immediately made me want to try shooting out in the elements – but was stopped because the lenses that came with it were not weather resistant.  That is, until this new 18-135 (APS-C is about 24-200.. roughly).  So – with this lens paired with the camera, we have a water resistant, dust resistant, freezeproof beast.

Now, weather resistant is not weather proof.  It’s not like you can take the camera and go underwater to make some shots (though lord knows I really wanted to try that).  When I think ‘weather resistant’ it immediately makes me think that this is a camera that gets to stay out in the elements just a little bit longer than its brothers and sisters.  Think to yourself – dust storm, rain storm, snow storm.  Theoretically, the camera should be able to handle this well..

But just -how- much water can the camera take?   Guess it’s our time to find out.

The Light Sprinkle – A Soldier’s Portrait

One of the hardest things I had to encounter when working with the camera was finding the rain that I wanted to shoot in.  Tampa is legendary for out and out downpours of rain.  The moment I got the camera in my hands, I stopped counting on the amount of storms that were destined to hit us – only to turn away at the very last minute.  I font remember the last time that I prayed this hard for some rain. 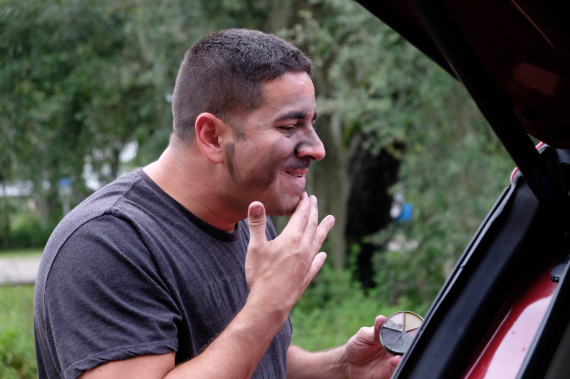 That said, I wanted to make a picture.  My buddy Gabriel is a Blackhawk helicopter pilot in Dubai.  He’s back home for a couple of weeks, and we wanted to make a portrait of him.  We headed out to Lakeland, FL to the Circle B Bar and Preserve to try to make a shot. 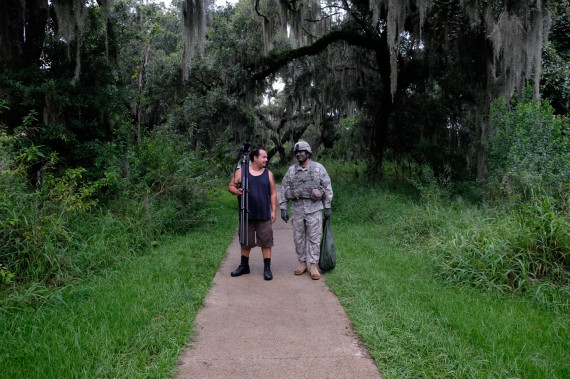 We headed out with my buddy Rob Hererra and scouted out places to go out and shoot.  We only had 2 hours before sunset.  There was a HUGE storm rolling in.  Of course we are going to get rained on!

Nope.  Not at all.  Its like a giant dry cone encircled us.. and prevented us from getting the shot that we wanted to get – Gabriel in the bush, looking for a way to the next point.  In the previous post, I had shared a picture that I did with my friend Tatom using the B1 Air and a Beauty dish – sans rain.  Make sure you check that out! 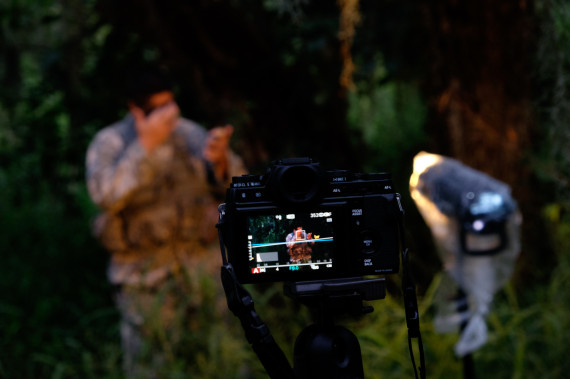 As it was getting really dark, I pulled out a Profoto B1 Air and used it’s modeling light to provide a small amount of sidelight to the shot.  I pre-cut a 1/4 cut of CTO and gaff taped it to the front.  We used the B1 Air’s modeling light so we didn’t have to worry about triggering while we were shooting.  The cover on it?  A turkey roasting bag (Big thanks to Erik Valind for the tip on that) 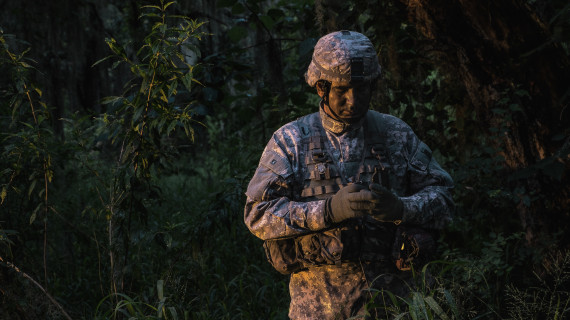 We got a cool shot – and the lens did well.. but the rain eluded us. 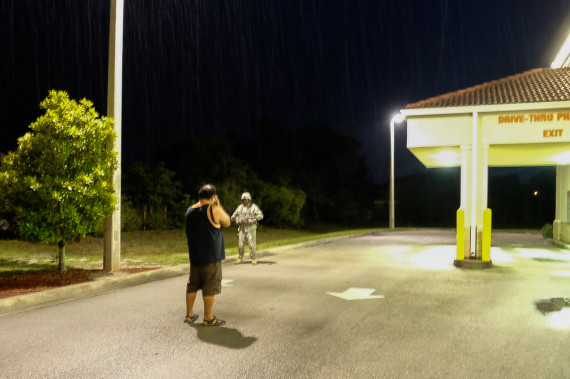 Now, you would think all would be lost, right?  No.  Not quite.  You see.. after we left the closed park and headed home, we drove into some rain – right by a CVS drugstore.  Hey…  If I go out for a shot – i’m not coming home empty handed.  We quickly setup and framed in the parking lot – rain coming down, and customers looking at us with three heads. 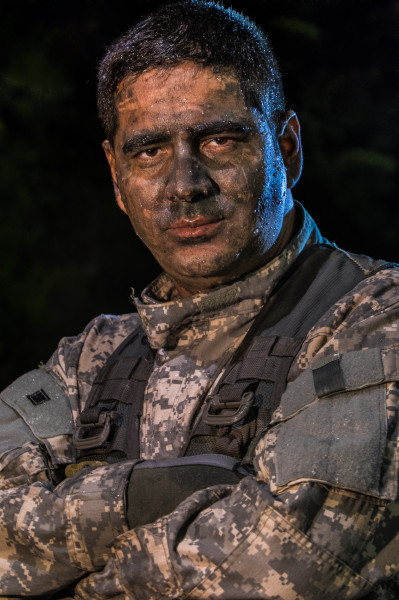 We pulled out the B1 air for a left light, but I felt like it was missing a little bit of something on the right.  Running back into the store- I came back out with some aluminum foil that we attached to a foamcore sheet.  Bouncing a flashlight into it, we could get some side definition, at at least give Gabe something that he could go home with in terms of a picture.  I wasn’t going to let him put all that gear out for nothing. 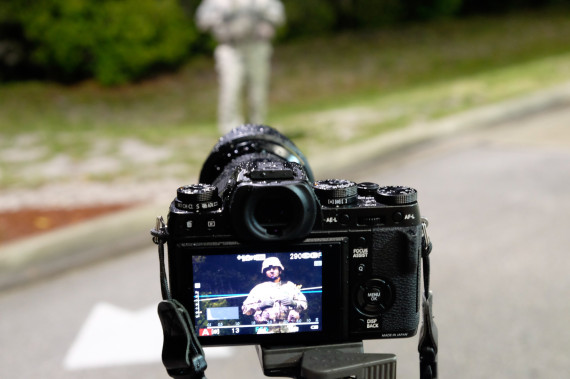 The camera?  She took the light rain pretty good.  So – we know a small drizzle wont really kill it.  Lets take it up a notch.